5.0 (1)
Plan with onX Backcountry
Previous Next

“Sixty rough, unmaintained miles with little to no water access make this trail a serious commitment. ”

There is water in the bed of Horn Creek about half the time, but unfortunately it is radioactive so don't drink it unless death by thirst is the only other option. The source of the radioactivity is a deposit of high-quality uranium contained within a collapsed cave system geologists call a breccia pipe. The odd yellowish stain on the rocks near the rim at the head of Horn Creek testifies to the presence of unusual minerals.

The West Tonto Trail continues toward Horn Creek. It can seem infuriatingly indirect, but it almost always represents the line of least resistance.

A small ridge north of Dana Butte forces the Tonto Trail up for a short distance, but soon the path resumes its predictable progression toward Salt Creek. The designated campsite at Salt Creek is located directly upon one of the most common types of archaeological sites in Grand Canyon. Archaeologists call them mescal pits or roasting pits and they represent the remains of slow cooking mechanisms employed by native people to prepare the hearts of agave plants. The plants were trimmed down to a fibrous core, buried and roasted. When the cooking was complete the people broke open the pile of stones to retrieve the food, thus creating a distinctive, crater-like circle of stones. Mescal pits are found throughout Grand Canyon, sometimes in the most unexpected of places.

The trail wanders west, past the little seep at Cedar Spring, and on to Monument Creek. Monument is the largest of the drainages between the Bright Angel Trail and Hermit Trail, and the only one that allows passage through the Vishnu Formation to the Colorado River.

Granite Rapids at the mouth of Monument is steep and impressive. The view upriver from the beach at Granite Rapids is a classic canyon scene that has attracted photographers since the days of the Kolb brothers.

Follow Boucher Creek down to the confluence with Topaz Canyon and look for where the trail climbs the slope west of the drainage bottom. Climb the trail to the top of the Tapeats Formation and start around Marsh Butte, headed for Slate Creek.

Progress west of Boucher is generally straightforward for an experienced Tonto Trail hiker. The Tonto is like a contour line on a topo map. The trail usually goes more or less directly across the cobble-filled beds of the drainages to the far side before continuing, but not always.

Map study does not adequately prepare one for all the ins and outs and roundabouts but given the time, water, and energy, it is mostly just a question of slogging out the miles, if undertaking this entire trail. 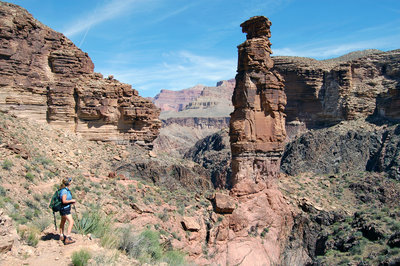 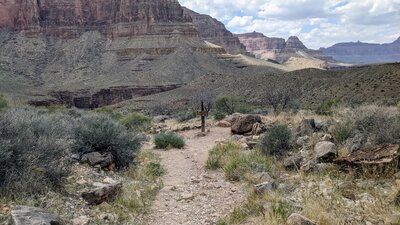 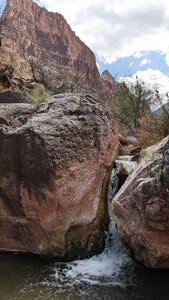 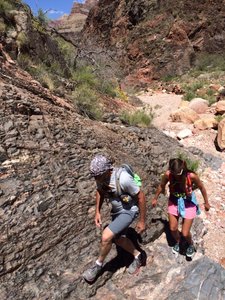 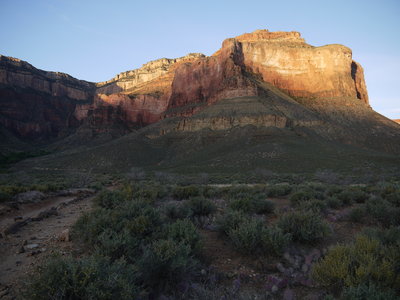 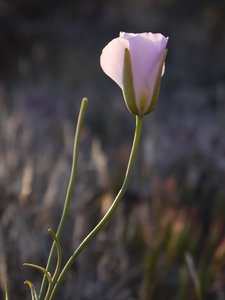