“Offers access to a charming & secluded part of the Grand Canyon, but the beauty comes with a price. ”

Hermit Road is a restricted area, but backpackers with a valid backcountry permit for the
Boucher Trail will be given the code by the Backcountry Information Center. Use the keypad mounted on the steel post that supports the gate to enter this code. Drive to Hermits Rest and follow the dirt road mile beyond the end of the pavement to the trailhead.

During the winter Hermit Road is open to private vehicles and no special access is required.

Hike the Hermit Trail two miles through the Kaibab, Toroweap, and Coconino Formations to the DrippingSprings Trail junction. Turn west (left) and follow the narrow Dripping Springs Trail for 1 mile as it rounds the bays at the head of the Hermit Drainage before intersecting the Boucher Trail proper. Striking views of the often overlooked Esplanade Sandstone which is the topmost member of the Supai Group are visible and quite impressive in this area.

The Boucher Trail departs in a northerly direction continuing the long traverse on the rim of the esplanade. The route crosses numerous small, steep drainages complicated by rockslides from the Coconino cliff above. Finally, the spectacular camp below Yuma Point is reached. This indeed is one of the finest upper canyon camps with soaring openness and classic seasonal Esplanade water pots. Fair warning that this area is directly below the Dragon Flight Corridor which can mean a sometimes constant sound of helicopter noise.

In the summer, a generous flight curfew of two hours at dawn and dusk will allow a well-planned hike to be thoroughly immersed in silence. In essence a hiker could pull into camp late in the day and pack up and move out early the next day and never hear the wumpa-thump of the tour flights.

The trail continues on the flat Esplanade as it rounds the corner below Yuma Point into the head of Travertine Canyon. Continue at this level for perhaps half a mile, then start looking for where the route drops abruptly down the slope toward the bed of Travertine Canyon. A break in the upper cliff requires intimidating hand and toe climbing, and it is tough going throughout the Supai. The trail is being slowly reclaimed by erosion steep, narrow, and covered in a layer of ball bearing-like pebbles. Take your time!

The route drops to the Redwall rim of Travertine Canyon, crosses to the west side of the drainage and wanders across the open saddle between Cocopa Point and Whites Butte to the top of a gully that plummets through the Redwall Limestone southwest of Whites Butte. The descent to the Tonto Trail is nothing less than brutal, a physical beating in classic Grand Canyon style. The Tonto Trail intersection is marked by a large cairn (no sign). Go right (north and east) along the Tonto Platform toward Hermit Creek or turn left (west) and continue down through the Tapeats Sandstone to Boucher Creek and permanent water. If time allows it is an easy walk down the creek to the Colorado River. 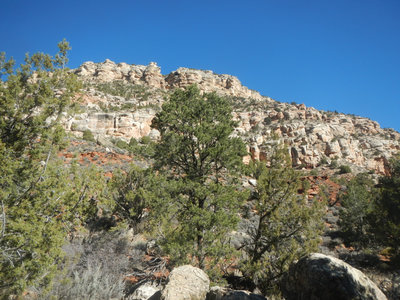 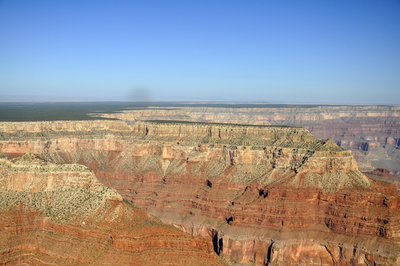 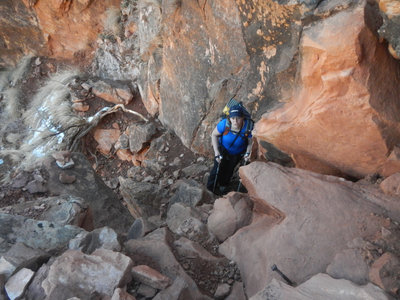