As the 1848 Gold Rush brought a population boom to California, the city of San Francisco quickly recognized the necessity of guiding steamships into her harbor safely. A system of lighthouses was developed, and in 1855 the Point Bonita Lighthouse was completed. As the 3rd lighthouse operating on the West Coast, Point Bonita brought many ships safely to the city. During the first years of operation, many sailors criticized the location of the lighthouse. The original location placed the lighthouse 300 feet above the sea, and the beam was often obscured by dense fog. By 1877, the lighthouse had been moved to it's current location, where it is still in operation today.

Due to the functional nature of the lighthouse, the tunnel leading halfway to the Point Bonita Lighthouse is only open during visitor hours: Saturdays, Sundays and Mondays from 12:30 p.m. to 3:30 p.m.

Visiting the lighthouse not only provides a sense of San Francisco's history, but the location also showcases incredible views of the Bay Area. If you're going to be in the Golden Gate National Recreation Area, the Point Bonita Lighthouse is a must-see stopping point for any visitors.

Short Walk: To reach the Point Bonita Lighthouse, visitors complete a 1/2 mile hike that is steep and somewhat strenuous in places.

Family Friendly: The lighthouse is located close to parking areas, and provides captivating views and history for developing minds. 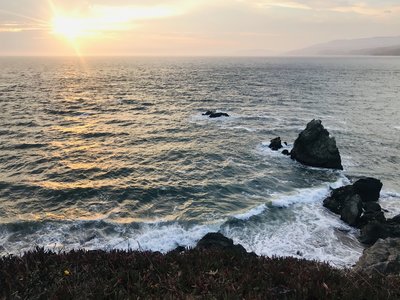