“A 2-mile loop through the part of the Jug Bay Wetlands Sanctuary that includes views of the Patuxent River wetlands. ”

Open 9am to 5pm (closed Sundays from December – February).

Part of the Jug Bay Wetlands Sanctuary, the Green Trail spans much of the northeastern portion of the Glendening Nature Preserve. The lightly trafficked loop is good for all skill levels and offers the chance to see wildlife and views of the Patuxent River.

Restroom access through the backdoor of the Plummer House.

Beginning behind the butterfly garden at Plummer House, take the blue and green-blazed Beaver-Rock Trail and proceed northwest for 0.80 miles to the Red Oak Trail. (The Beaver-Rock Trail leads into a trough as it passes near the high bluff above Galloway Creek at the Sand Barrens.)

At the end of the Beaver-Rock Trail at the Sand Barrens, take the Red Oak Trail south for about 0.2 miles before turning east on the Cedar Trail. You'll then link back onto the Beaver-Rock Trail for a short jaunt south to the white-blazed Maple Trail. Take the Maple Trail south for 0.4 miles to join the Blueberry Trail. Take the Blueberry Trail east for about a 0.10 mile to connect with the green-blazed Pine Barrens Trail. Follow the Pine Barrens Trail north and then turn east as you reach the mowed area by the barrens. (You can also take the 1000 meter loop around the Pine Barrens at this point.) Continue east for 0.25 miles to the trail's end.

In 1942, John and Grace Riggleman purchased the 300-acre Jug Bay Farm that sits here along the Patuxent River. Anne Arundel County purchased Jug Bay Farm in 2004 and the site is under management by the Jug Bay Wetlands Sanctuary. 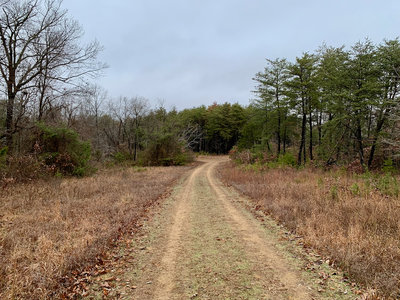 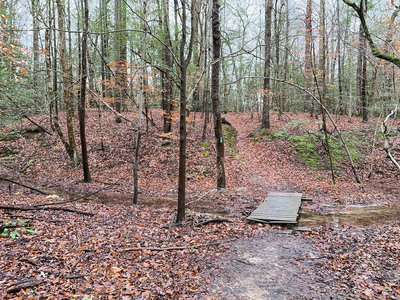 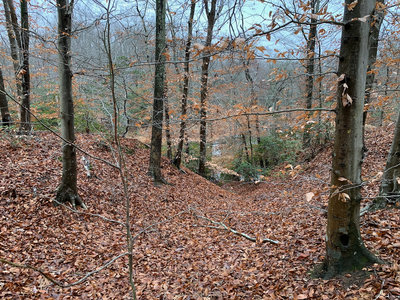