This hike is fairly moderate; it affords hikers nice views and passes through a historic orange grove.

River crossing right at the beginning of the hike. Most of the time this is passable via rock hopping or wading, but occasionally after a storm it can be dangerous to attempt to cross.

This hike begins at the Oso trailhead and starts off with a river crossing. The Ventura River only flows about half the year and typically can be crossed by rock hopping or wading. Occasionally, after a storm, the river is impassable and attempting to cross is not recommended.

This trail continues south through an old orange grove to a fork; turn right to head west along Rice Canyon Trail. Cross Canal Road and a bridge over the canal. This trail follows Rice Creek, which is shaded by oak and sycamore trees. As you pass through a gate, you'll enter Los Padres National Forest.

The trail gradually ascends while offering nice views of the Ojai Valley. As the trail turns south, it merges with a narrow dirt road; crossing a cattle grate brings you back into the preserve. Continue on the trail past El Nido Meadow and descend into Wills Canyon over a footbridge and to an intersection with Wills Canyon Trail.

Ventura River Preserve was originally known as Rancho El Nido which was planted with orange trees in the 1920s. In the early 2000s, the Ojai Valley Land Conservancy raised money to purchase the area and opened the preserve to public use in 2003. 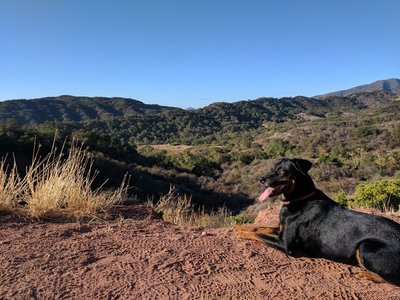 All Clear 97 days ago See History

Gene Marshall Out and Back