“Sweeping vistas of Rocky Mountain National Park from the summit of the grave site of avid hiker Edwin Bradt. ”

Family Friendly Great history behind the trail and summit. Mailbox at summit to submit wishes, dreams, and prayers.

Other than Mt. Ypsilon, probably no other geological feature is more closely tied to the YMCA of the Rockies than Bible Point. Although shorter and more accessible than surrounding vantage points, it still offers outstanding views of the YMCA, Glacier Basin, and common surrounding environs.

In the time of Guy Lacoste, it was know as Buena Vista. The name was changed as a result of the tragic death of Edwin Bradt whose grave is located at the summit. Although only reaching the age of eighteen, Edwin Bradt's life was anything but normal when compared to most young men of his time. At the age of 12, he traveled around the world for a year with his family visiting missionaries and world-renowned places. In 1914, he made his first visit to Estes Park. An adventurous soul, he climbed several mountains, including Longs Peak. In 1916, Edwin attended the YMCA Student Conference with his father and after, they stayed to build a cabin at the YMCA.

In June of 1918, Edwin was killed in an automobile accident. At his father's request, the body was taken to Estes Park where the funeral was held at the YMCA of the Rockies. Employees of the YMCA carried the casket to the base of a big boulder above the Bradt cottage at Buena Vista where Bradt was buried. Beside the grave, the Bradt family placed a mailbox containing a bible and register for hikers. Over the years, the old name gradually faded away to be replaced with Bible Point.

The trail does follow some of the same route as Glacier Creek Trail. The two split roughly 0.3 miles from the YMCA Livery. Bible Point takes a sharp left up the mountain, while Glacier Creek Trail continues straight on a flatter path.

Once the two trails split, Bible Point becomes a narrow singletrack. It is semi-rocky and has a few steep spots up the mountain. Due to the late May snowstorm, hikers may see a few fallen down trees along the trail.

in YMCA of the Rockies Estes Park Center

in YMCA of the Rockies Es… 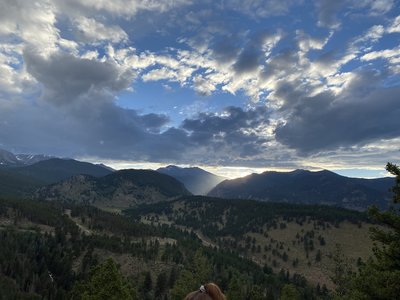 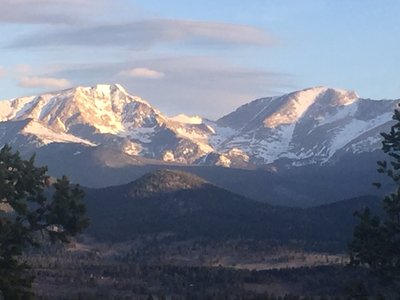