The park sometimes closes the southern part of this trail during the spring and parts of summer due to the nesting activities of Peregrine Falcons. So always check the path’s status on the park’s website before heading out.

This historic trail crosses several rockslide areas on its climb up the northeast shoulder of Champlain Mountain. It is one of the park’s first paths. Rudolf-Ernst Brünnow, a Princeton University professor - and the designer of some of the park’s other famous trails including the Precipice Trail (to which this path links) - was the main builder of this path in the early 1910s. Its name comes from Princeton’s colors—Orange and Black. Throughout the years, the path has endured some significant rock slides, including one in the 1990s and one in the mid-2000s, which was the result of a sizable earthquake. The park had to shut it down for a few years after the earthquake to repair all of the damage, but the trail was back in action by late 2009.

This path is the best way to get to the second half of the Precipice Trail, and one of the few ways to connect to the northern portion of the Champlain Ridge trails. The full hike starts where the trail meets the western side of the Schooner Head Path. There is no parking close to the trailhead. Your best bet is to park in the Precipice Trail parking lot located next to the Park Loop Road. From there, hike eastward on Murphy Lane for 0.3 miles, and then take the Schooner Head Path north along a low-lying marshy area for roughly another 0.7 miles.

The trail starts out very gradually for the first 0.25 miles until it crosses over the Park Loop Road. From there you’ll start ascending rather quickly, including a series of rock stairs that crosses one of the rockslide areas of the trail. At about 0.5 miles you’ll reach a trail junction. To continue on the Orange and Black Path, turn to the south (if you head to the north you’ll reach the Champlain Ridge North Trail in roughly 0.1 miles). Hiking southward on the Orange and Black Path, you’ll run into the Precipice Trail in another 0.5 miles. That’s where this trail technically ends and you should double back and retrace your steps to the beginning. One could go down the first half of the Precipice Trail, although it is not recommended due to that fact that the Precipice Trail can get quite crowded and it’s difficult to negotiate the steep climb down in the opposite direction of most hikers.

In sum, this trail is very rocky, but provides some great views of Frenchman Bay and Schoodic Peninsula to the east. Treading up the path not only gives you great views, but also a connection to the past, to a time when the park’s first trails started to come into existence. 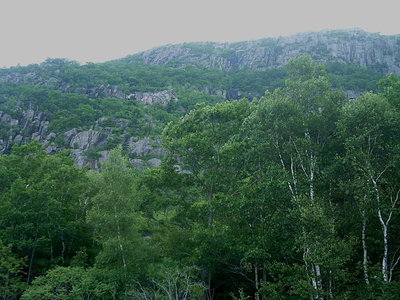 All Clear 31 days ago See History

Blue Hill Up and Over