“A rewarding hike through a streamed valley and up part of Cadillac Mtn to a fine gem, The Featherbed. ”

This path, although not nearly as well-travelled as many of Acadia’s other trails, is a fine hike that offers various terrains and rewards over its 2.6 miles. It presents both a tranquil walk along a peaceful stream and a rocky climb up to a saddle on Cadillac Mountain’s southern ridge complete with The Featherbed, a small, but tranquil and picturesque pond—one of the park’s lesser-known gems. This path also links-up with several other trails and offers circuit hikes in various directions.

You can approach this path several ways. Its eastern trailhead is located directly off the Canon Brook Trail Parking Lot, just south of The Tarn on Rte 3. Its western end is atop the southern ridge of Cadillac Mountain, right at The Featherbed, and where the Cadillac South Ridge Trail and the Bubble and Jordan Ponds Path intersect. You can also linkup with the path at roughly its halfway point at Dorr Mountain’s southern base via either the A. Murray Young Path or the Dorr South Ridge Trail. The closest accessible parking is the Canon Brook Trail Parking Lot.

Beginning from the eastern trailhead, this path gradually descends for 0.2 miles until it turns sharply southward and follows the west side of the stream of its namesake. It’s relatively flat here and provides a peaceful feeling as you skirt some small ponds and waterfalls. Then, you’ll reach Dorr Mountain’s southern base after another 0.7 miles. There, the trails turns sharply westward and descend alongside the marsh that runs along Otter Creek’s northern part. Along the way you’ll see the Dorr South Ridge Trail descending and intersecting from the north. After another 0.2 miles, the A. Murray Young Path will also intersected from the north and then you’ll begin quickly ascending Cadillac Mountain’s southeastern side. It’s very steep and rocky for the first 0.5 miles of this climb and then becomes more gradual in the last 0.4 miles, at which point you’ll reach the path’s western trailhead. There you’ll find the lovely Featherbed, a small, peaceful, mountain pond with several secluded areas, should you want to tune out anyone else in the park. The last time we were there, although we saw several people descending the Cadillac South Ridge Trail, we still found a spot where we could eat our lunch in peace, away from the presence and sense of any other trail users.

In sum, this is an underappreciated path that offers a variety of terrains, moods, and hiking circuit options. You can’t go wrong trekking this one.

Multiple pines, ferns, and other typical Acadia flora. There are also several birds and the occasional otter, muskrat or mink. 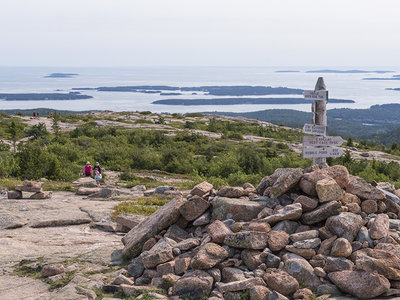