Ensure that you have adequate skills and equipment before undertaking this route. A 50-foot rope, harness, webbing, belay device etc. are required to descend a vertical cliff near the Colorado River. There are several other places that travelers may want to have a belay for safety. Plan your water sources ahead of time.

The beginning of this route is at a junction near the southern end of the South Bass Trail. On some maps, the initial part of the Royal Arch Route is called the Esplanade Trail. Take this trail almost directly west over mostly level parched ground. Traverse across the hillside, crossing the upper reaches of Garnet Canyon and passing under Chemehuevi Point. Expect rocky going with some boulder fields. The open trail bends generally southwest, ducking in and out of valleys, never losing much elevation until reaching about 5000ft in the low point between Montezuma Point and Point Huitzil.

Here, the cairn marked trail enters the Royal Arch Canyon and descends immediately. Clamber down ledges and through drops, sometimes passing backpacks down to your partners. There are some higher ledges and deeper pools than can be avoided by taking marked bypasses or rappelling. Eventually, you reach the creek bottom that is populated with bushes and some shade trees. Scramble over boulders and through passages, sometimes wading. Take in the amazingly huge Royal Arch, the only natural arch in the park with a stream running through it. To exit the Royal Arch area, follow the cairns on the east side to avoid the huge drop. After a gradual descent across the grassy plateau with views across the canyon of Explorer's Monument, rappel the two-tiered drop. From here it is a steep hillside descent to reach the always inviting Toltec beach on the Colorado River.

Complete the Royal Arch route by following the trail above shoreline east (upstream) for another 1.5 miles. Not too much elevation gain here, but the terrain is rough and rocky. The rocks are extremely sharp, easily capable of shredding packs and skin. The trail ends in Garnet Canyon at the junction with the West Tonto Trail. 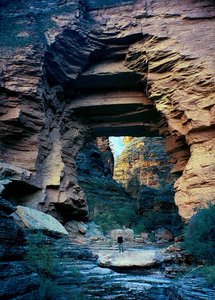 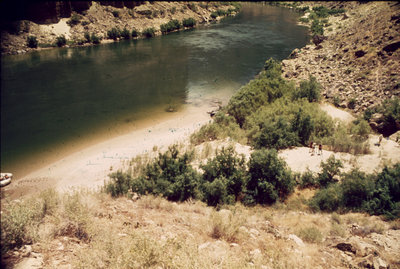