“This incredibly rewarding route is a full day of challenge and amazement. ”

The road to Crawford Path Trailhead (Mount Clinton Road) is closed during the winter.

While the traverse of Franconia Ridge may be the most iconic White Mountain ridgewalk, a "Presi Traverse" is a step up in challenge and reward. A majority of the route affords no shade nor shelter - only stellar, uninterrupted views for hours on end when the clouds are lifted.

The Presidentials, and Mount Washington in particular, are notorious for remarkably horrendous weather and have a storied history of killing over-exposed hikers on their upper slopes slopes even during summertime. Any safe completion of the traverse demands a high degree of preparedness. Although many choose to backpack it over several days, finishing the entire trail in a day is a daunting summertime challenge for fast and experienced hikers.

This route includes a series of trails, largely following the Gulfside Trail north of Mount Washington (Northern Presidentials) and the Crawford Path south of Mount Washington (Southern Presidentials) with several exceptions. There are two popular routes: the "minimal" traverse of 19 miles exiting after Mount Eisenhower and the "full" traverse of 23 miles exiting after Mount Jackson.

This route traverses the most prolonged stretch of above-treeline hiking in the Eastern US, which runs virtually the entire distance between Mount Madison and Mount Pierce. The risk of prolonged exposure to high winds and low temperatures is significant even during summer. Dense fog and thunderstorms that materialize quickly are frequent hazards.

Treadways are rocky, especially in the northern Presidentials. Trails are well-marked with blazes below treeline and cairns above. Carrying a detailed map is vital for identifying bail routes to get off the ridge during inclement weather or emergency.

Do tread carefully in the Alpine Zone; remarkable but fragile plant life abounds.

One of many popular routes, this version of the presidential traverse begins at the Appalachian Trailhead at the AMC Highland Center. Take either Randolph Path, Air Line, or Valley Way trails to the AMC Madison Springs Hut.

Summit Mount Madison (out and back up very rocky, scrambly trail). From the hut, follow the Gulfside Trail along the ridgeline to the summit of Mount Washington (taking the Air Line Trail to summit Mount Adams, the Mt Jefferson Loop to summit Mount Jefferson, and if desired the Mt Clay Loop to summit Mount Clay along the way ). From the summit of Mount Washington, follow the Crawford Path along the ridgeline down to Lake of Clouds Hut and continue along Crawford Path to just under Mount Pierce (summiting Mount Monroe with the Mt Monroe Loop and Mount Eisenhower with the Mt Eisenhower Loop). The Mount Pierce Summit, which is very close to Crawford Path, is an easy summit to hit even if you're doing the minimal traverse (though it is not officially part of the traverse).

Minimal Traverse: Continue down the Crawford Path to either the AMC Highland Center (left at fork 0.2 miles from road toward Route 302) or the Crawford Path Trailhead (right at fork) on Mount Clinton Road. Pass Gibbs Falls on the right as you descend.

Full Traverse: Continue over Mount Pierce to the summit of Mount Jackson on the Webster Cliff Trail, then take a right onto Webster-Jackson Trail to exit onto Route 302. You'll be on the Saco Lake Trail for the last 0.3 miles.

Alternative: You can also take Star Lake Trail from Mount Madison to Mount Adams; this is a more difficult trail. Tuckerman Ravine Trail also descends Mount Washington, but is much more difficult than Crawford Path and is out of the way toward Lake of Clouds and Mount Monroe.

A diversity of plant life observable across relatively little elevation change is one of the White Mountain most intriguing features, and nowhere is this on better display than in the Presidentials.

At treeline's edge, in the so-called "Krummholz Zone," the effects of extreme wind exposure are visible in the stunted, gnarled spruces and firs that cling to the mountainside in mats just a foot or two high. Here, observe one of the most abrupt ecological boundaries on earth. Very few species regularly inhabit both sides of the treeline.

The plant community above treeline in the Presidentials includes a depth of very rare and highly-adapted species that is beyond the scope of this description.

Mount Jackson is technically not named for President Jackson, but for NH state geologist Charles Thomas Jackson. Because of this, many people do not include it in the definition of a Presidential Traverse.

Mt Clay, named after 19th century senator Henry Clay, was renamed Mt Reagan by the NH state legislature in 2003. However, the US Board on Geographic Names voted not to change the name in 2010, so it remains Mt Clay on most maps. Because of the name change, some suggest it should be included in a Presidential Traverse, but most do not require summiting Mt Clay/Reagan as part of the hike.

Ronit Malka with improvements by Liz and 2 others
Full Details 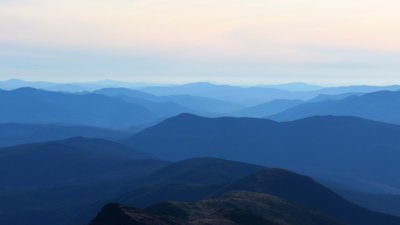 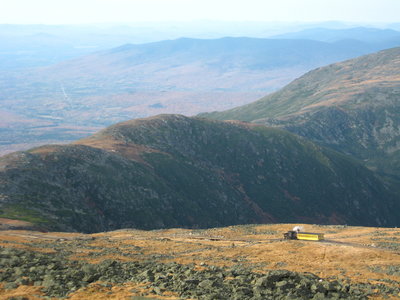 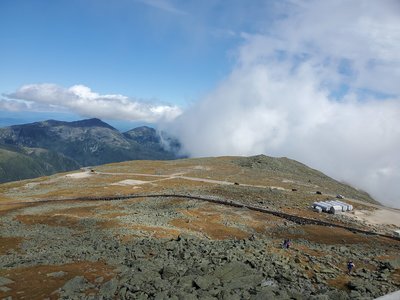 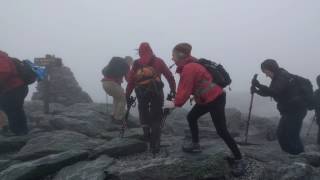 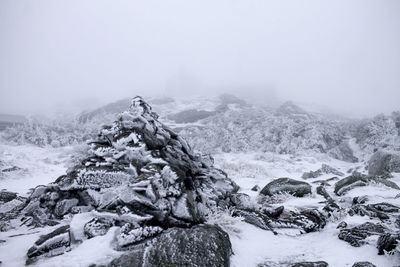 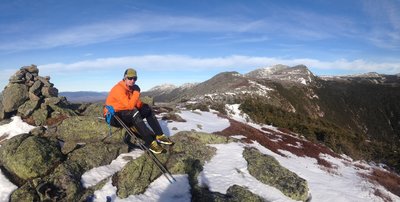 All Clear 21 days ago See History

Arethusa Falls Out and Back