“Features two large lakes, a few challenging hills, and an abundance of forests, wildlife, and scenery. ” Highlights of the approximately 12 mile loop hike through the Hoosier National Forest in northern Perry County include Indian Lake, Lake Celina, the Middle Fork of the Anderson River, and a side-hike to the historic Rickenbaugh house. Backcountry camping is permitted so this hike is popular with backpackers. Shorter hikes can be made using the Two Lakes Trail Connector. A longer hike can be made by using the same connector trail and hiking in a figure-eight.

There is a gate house at the park entrance where day-use ($5/vehicle) and camping fees ($20/night) are collected April 15 - October 31. Park services are reduced in the winter.

The nearest gas station is at the I-64 & SR 37 interchange to the north, and the nearest medical facilities are south on SR 37 in Tell City.

During warmer months, vegetation crowds the trail in places and ticks are abundant. During cooler and wet periods the trail can be quite muddy and slipping on the uneven ground is common.

There are multiple parking areas along main road through the park where you can begin your hike. This mapped hike beings at the first parking area on the left after entering the park, and is at the bottom of the hill just past the Lake Celina and campground road. As a national forest, backcountry camping is permitted. There are some frequently used sites along the west, south, and southeastern sections of the trail. There is a well established backcountry camp site just to the east of the Lake Celina Dam, approximately 50 yards or less from where the woods end. Potable water is available during the peak/warm months at restrooms and campgrounds. Unfortunately, the trail only passes near those locations along the north-east side of Lake Celina.

The trail is well marked with white diamond blazes.

Hiking counter-clockwise will take you uphill rather quickly. At the top, you'll pass through a previously forested area that has been cleared in recent years and re-established in warm-season grasses. Eventually, the trail drops down into a large valley where you'll encounter a few large stream crossings. The largest of which is the Middle Fork of the Anderson River. The river is wide, relatively shallow and rocky, and depending on rainfall, you may find the water knee-deep. There are a few more challenging hills as you wrap around Indian lake, and a larger hill to traverse as you travel between the two lakes on the south side.

After crossing the Lake Celina dam, the trail follows the lake's perimeter at a reasonable distance so that you get occasional views of the lake, but are never at risk of sliding into the water. The shoreline is rather steep, and the lake is quite deep. Near the end of the loop, the Two Lakes Trail briefly merges with the Celina Interpretive Trail which splits to the west. Taking a side-hike to the Rickenbaugh house via the Interpretive Trail is worth the effort. Another trail spur leads to the south face campground.

A short 1-mile round-trip side-hike to the Rickenbaugh house via the Celina Interpretive Trail is worth it. The two-story sandstone house was built in 1874 and served 4 generations of the Rickenbaugh family before being sold to the forest service in 1968. An informational kiosk is outside to share the history, and the park service occasionally opens the house for tours. 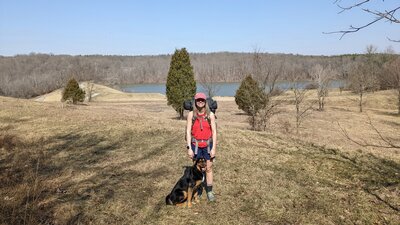 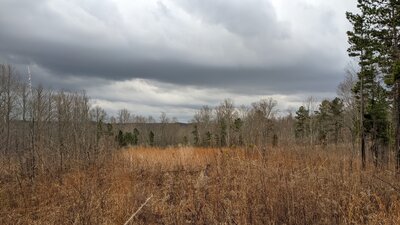