“A short, steep climb through the forest leading to a breathtaking mountain cirque, complete with waterfalls. ”

This section of Highway 40 is closed December 1–June 14, making the trail inaccessible.

Highwood Pass is the highest paved pass in Canada and this trail climbs high above it, so you may experience noticeable shortness of breath.

Restrooms are located at the Highwood Meadows Day Use parking lot just south of the trail.

This is an interpretive trail with numbered trail markers corresponding to sections of an informational pamphlet. The pamphlet can be freely downloaded from the Alberta Parks website.

Ptarmigan Cirque shares a parking lot with the Highwood Meadows Interpretive Trail and, since both are very popular tourist destinations, the trail is heavily trafficked and parking may be limited. Luckily, Highway 40 has wide shoulders and many parking lanes.

From the Highwood Meadows Day Use parking lot, take the Highwood Meadows Interpretive Trail a short distance until the sign for Ptarmigan Cirque. The trail crosses the highway and heads steeply upwards through the forest. There are twelve numbered posts along the trail corresponding to sections of the pamphlet, which also serve as good resting points.

The trail splits once before the meadow loop, one side continuing through the forest and the other leading to a cliffside view of a waterfall and the surrounding mountains, both continuing steeply upward before rejoining. Eventually, the trail splits again, with a sign indicating one-way traffic, and soon leads out into the open, rocky meadow where the slope becomes much less severe. On the northern end of the loop, the trail is less clearly apparent and mostly consists of large, loose rocks.

A stream with several small waterfalls runs through the meadow, and near the 8th marker, a trail diverges from the loop and heads further up towards a decently-sized waterfall. Heading back down the loop involves spectacular views of the surrounding mountains, as well as a closer look at the waterfall seen on the climb up. The trail reenters the forest and rejoins the trail at the one-way traffic sign. Continue down the way you came.

The Highwood Meadows area, including Ptarmigan Cirque, is well known for spectacular wildflower blooms. Bighorn sheep roam the slopes and roads, and marmots can be found (or at least heard) everywhere. As the trail name would imply, ptarmigan birds make their homes in the meadow, but they may not be easy to spot. 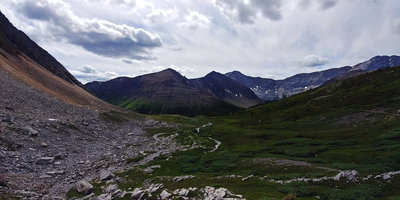