“A beautiful "figure eight" loop around Upper Kananaskis Lake and up into the back country. ”

This is a beautiful loop that is usually taken counterclockwise and not in a figure eight. It cuts into the BC backcountry and over the incredibly scenic Northover Ridge. Snow can often be found on the upper slopes, which makes for a very enjoyable boot ski down at least part of the ridge.

To do this hike in its most common form start at the Interlakes parking lot by Upper Kananaskis Lake. The trail will head north and cross a small dam before turning west to circumnavigate the lake. The trail will split about 2 km in. The right-hand fork will take you to the Forks Campground.

At the Forks, you'll continue on toward Three Isle Lake. On the way, you'll encounter a headwall. It is a fairly good climb, but nothing overly difficult. Shortly after, you'll reach Three Isle Lake. Skirt around the south side of the lake, still heading west. Once around the lake, the trail will bend south, and you'll head through the drainage basin toward the slopes leading up to Northover Ridge. There is not much for trails through the basin, but the scree slope ahead is obvious. It is quite a climb up to the ridge, but there are some switchbacks to follow. This will take you up to a saddle, at which point, you'll turn left and head straight up another slope before reaching the top.

Follow the trail, now heading southeast. You'll skirt around a cliff edge; be careful here because it is a long drop down. After that, there is a short, maybe 20 foot, section where you'll hike along a very narrow section of ridge with steep drops on both sides. After that the ridge, it is wide open. The views along here are incredible on a clear day, and you can easily see four or five mountain ranges retreating in the distance. It is covered in shale and talus, so hiking may be slow, but there is little concern of exposure.

Before heading up Northover Mountain proper, the trail will drop down to the south into BC and towards a couple small lakes. Often, there is snow on this slope, so enjoy the boot skiing as you descend. The trail clearly continues to the south, and you'll drop down through a gully before bending to the east, down a grassy slope, and towards Aster Lake through its drainage basin. The trail goes around both sides of the lake; the north side will require a stream crossing, but the south side is longer; the choice is yours.

Once on the other side, you'll spend a little time traveling along Aster Creek before descending the headwall across scree slopes above Hidden Lake. The view along this section look out over both Hidden Lake and Upper Kananaskis Lake, so make sure to take some pictures. Eventually you'll get back into the trees and jog around the south side of Hidden Lake.

The trail will then spit you out onto the main trail around Upper Kananaskis. Turn right at this point and head around the south side of the lake. The hiking is relatively flat at this point, so open up and enjoy forest trails and views, when they come. You'll cross a couple streams along the way, with a lovely double waterfall close to the main Upper Kananaskis Lake Trail. Once you reach the main trailhead, keep hiking. You'll hike by picnic sites and then cross a stone dam. Once across the dam, the trail will bend left and continue along the lake shore. Just keep following this and you'll find yourself back at the Interlakes parking lot in no time. This route comes out to about 37 km in length.

If you would like to do this route as shown in the map above, take the left fork instead of the right one leading to the Forks Campground. The trail will bend south around the lake following the main Upper Kananaskis Lake Trail. You'll cross two larger creeks with bridges.

After the second bridge, there will be a trail on the right. It is an obvious enough trail, but there is no sign to mark it. This trail heads to Hidden Lake. At this point, just follow the instructions from the fork to where the trail dumps back onto the Upper Kananaskis Lake Trail in reverse. Once you have passed the Forks Campground, you'll get back to Upper Kananaskis Lake. Before reaching the fork, there is a shortcut heading through a talus field at the west end of the lake, take this south around the lake according to the previous instructions. This will net about 48 km. 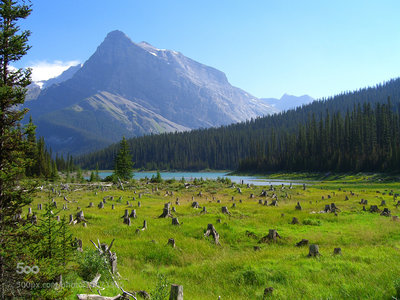 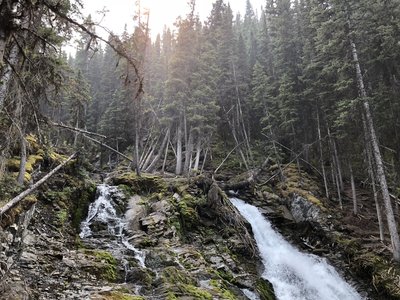 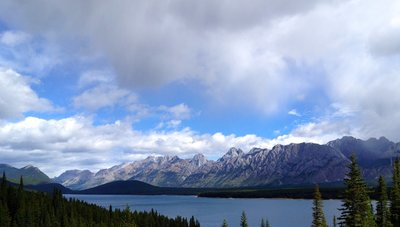 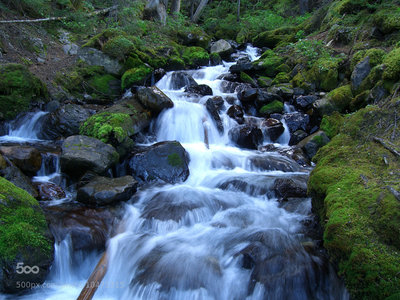