Wilderness permits are not required, but a campfire permit is required for campfires. Pets are allowed so long as they are under control and do not harass the wildlife. This is a good early season hike.

There is no water on the ridge and the shallow canyons have only intermittent streams, so you need to bring water for however long you plan to stay.

This off-trail route branches off the Domeland Trail-34E15 at about the 2 mile point near "the golf ball" (see the description for the Domeland Trail). The first mile does not veer very far from the Domeland Trail, so it does not matter much where you leave it. However, after the Golf Ball, I think it is easier to find your own way along the top of the ridge, rather than to try to follow the trail through the brush. Basically, just try to go as level as possible, following the gently sloping ridge that drops only 350 feet in 2.6 miles. You want to go straight out from the saddle, which you crossed on the Domeland Trail between Bart Dome and the unnamed domes.

The ridge has scattered trees and blooming California lilac bushes (ceanothus). I was there probably only 2-3 weeks after the snow melted. There were numerous, gently sloping, sandy drainage paths that were covered with tiny flowers that came in many colors. There are open views in all directions of the surrounding domes. The local rock formation have numerous undercuts. I saw one succession of undercuts that created a tunnel that you could hike through (stooped) for about 30 yards.

You can hike out as far as you want or climb one of the small domes on the ridge to get a better view. To climb any of the major domes (Radiant, North Domes, or Stegosaurus Fin), you just veer off the ridge and drop down, not very steeply, 400 feet to the bottom of a shallow canyon at the base of the specific rock formation.

To return, just head back to the saddle between Bart Dome and the unnamed domes.

Mixed conifer and pinyon pine, California lilac bushes (ceanothus) and millions of tiny flowers about 3-6 inches tall in a variety of colors. Beware of rattlesnakes. If in doubt, use your poles to check rocks and logs before stepping over them. 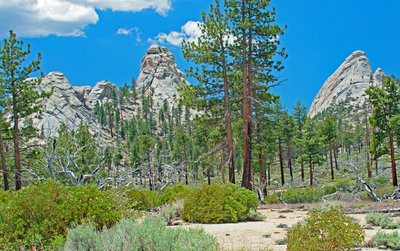 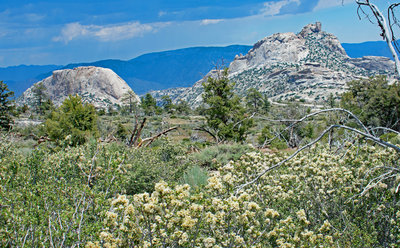