“The definitive loop at Wallace. ”

The wooded hillsides of Wallace State Park provide a peaceful escape from the rush of everyday life. Nestled in the rolling farmland of northwest Missouri, this family-oriented park is a recreation retreat for nearby Kansas City residents in need of open trails during the wetter weeks of the year.

Start looking for another left turn after about 1/2 mile, this time on Deer Run Trail. About a mile later, you'll see another, smaller pond. Take a left on Deer Creek Trail here. About 1.5 miles later, take another left to rejoin the Deer Run Trail for nearly a mile.
Your last left turn will be on Rocky Ford Trail, which will take you back to a park road where you can run continue straight to the parking lot where you began.

White oak, black oak and northern red oak trees can be found on the ridgetops, with an understory of sumac, dogwood and redbud. Stately sycamore and bur oak trees grow in the rich bottomlands along Deer Creek. Trout lilies, May apples, spring beauty and Dutchman's breeches cover the forest floor. The dense forests, old fields, streams and ponds create a diverse habitat for a wide variety of birds and other animals, such as white-tailed deer, raccoon, opossum, muskrat and squirrel.

When settlers began to arrive in the area in the early 1800s, they found a rich and diverse land. The streams and forests provided opportunities for trapping, hunting and fishing, and the prairies could be planted in crops. Many of the early settlers arrived via a well-worn road known as Hound Dog Trail, along which daily stagecoaches operated between Hannibal and St. Joseph. Today, much of Highway 36 follows this early road.

As other settlers moved into the area, more of the land was converted to agricultural uses. Through the efforts of the Cameron Sportman's Club and other citizens, the state acquired a 121-acre section of land in 1932. Named after the family who owned the land for more than a century, Wallace State Park was one of the first recreational areas in northwest Missouri. Much of the initial development was done through the Works Progress Administration (WPA) in the 1930s. 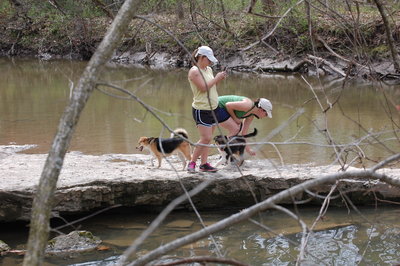