“A winding trail with several overlooks connecting to other trails deep in the natural area. ”

No hiking on this trail after dark. There are several backcountry campsites throughout area. Quiet hours 10pm-6am.

Collins Rim Trail is a beautiful trail with multiple experiences along the way.

The first mile in from Collins West Camp Access Trail is the most difficult portion. The difficulty comes in various forms ranging from abrupt trail turns to traversing stone/rock paths which, when snow-covered and icy, can be quite tricky, so taking it slow in these areas is key. Another thing that can be tricky in this first section of the hike is the trail markers. They are there, just not as frequent and exposed as other parts of the trail. You can easily go in the wrong direction in one or two areas if you are not paying attention.

Once you get to Collins River, you are getting ready to climb up the trail to the Rim portion. You do have to cross Collins River, but there are good bridges to use although no more than two people should go at a time when crossing. The first bridge crossing does have some nice views of the river. After you cross the river for the last time, you'll begin your hike up to the Rim. You gain some elevation here, but the climb is pretty gradual. Take your time, and it won't be that strenuous.

Once you are actually on the Rim, the rest of the trail is pretty smooth. There will be some climbs and descents, none of which are very hard. You'll cross several streams; depending on time of year and amount of rainfall, they may be hard to cross without getting wet. And if the temps are below freezing, they can prove quite tricky to cross. In other words, don't rush.

There are several beautiful lookout points along the way as well. The access trails to these points are marked with blue markers. This portion of the trail is very nice and quite serene, but at times does seem never ending. Have faith and keep hiking, and you'll come to the end of the Collins Rim Trail. The actually rim portion of the trail is around 4.5 miles. The Collins Rim Trail will run into two different trails. One is Stagecoach Road Historic Trail leading you to the Connector Trail which from there you can go west to towards Stone Door or you can go east towards Hobbs cabin.

This trail overall is amazing, full of challenges and adventure. 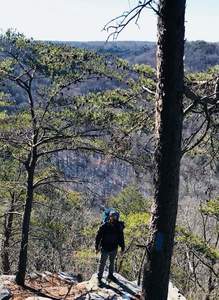