“An easy trail that wraps around the North Community with multiple access points and connections to many popular trails. ”

Family Friendly Very easy grade. Multiple access points can be used to tailor a hike to any length. Many residents start from their own homes.

The Perimeter Trail wraps around much of the northern and western edges of Los Alamos. It can be started from either end or from multiple access points in between. Arrange a shuttle or, during the day on weekdays, the Atomic City Transit bus system can be used to complete the hike.

Starting from the eastern end, park along Maple Drive about 500 feet north of the intersection of Maple Drive and Sumac Lane in the Ponderosa Estates Subdivision. There is no trailhead signage at this location, so look carefully for the start of the trail adjacent to a house heading west along the south side of the canyon at the sharp bend in the road.

The Perimeter Trail shortly intersects several other access trails. Always bear right heading in a westerly direction along the side of the canyon in this section. The trail gradually rises and is separated from nearby houses by a low ridgeline so that hikers enjoy a measure of solitude. However, this narrow singletrack is also a very popular with mountain bikers, so listen for oncoming traffic and be prepared to step off the trail for safety.

In about 1.3 miles, the trail intersects the Mitchell Trail #69 for a few yards. Several wooden signs help guide the hiker over a low ridge and back onto the Perimeter Trail which then traverses the Western Perimeter. There are many opportunities to take in wide open views of the Los Alamos Townsite and the Sangre de Cristo Mountains looking east across the Rio Grande Valley. Heading south, the trail crosses North Pueblo Canyon in about 1 mile, climbing steeply out of the canyon and then runs west alongside Pipeline Road for 0.1 miles before crossing it.

The trail continues south above the Quemazon Subdivision for about 1 mile, then turns easterly and descends to the Western Area subdivision to end at Ridgeway Drive near the intersection of Sandia Drive and 49th Street.

The Perimeter Trail connects with a number of other popular county trails, including the Rendija Trail #279, Dot Grant, and Bayo Canyon trails on the northern end and the Quemazon Trail on the southern end. Sections were severely burned in the Cerro Grande fire of 2000, but this trail now provides good examples of post-fire landscape recovery.

Many wildflowers. Some deer and occasional bears. 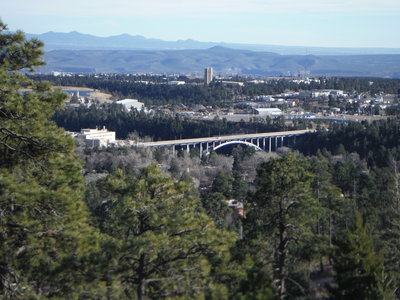 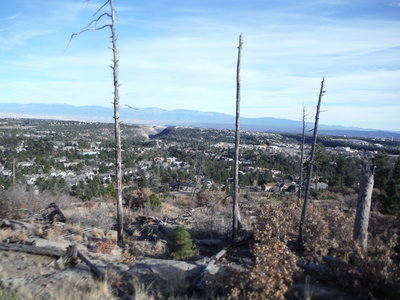 Shrine of the Stone Lions AKA Yapashi Pueblo Ruins