“A trail that climbs to awesome views of mountains, glaciers, valleys, and lakes in both Alberta and British Columbia. ”

Mumm Basin Route starts through the fir forest with lush undergrowth. Almost immediately, it begins to climb. As it climbs, it soon begins to follow a creek to the right of the trail. Views of the surrounding mountains, glaciers, rivers, and lakes slowly emerge as the trail climbs, and the trees shorten and thin. About 0.7 miles from the trailhead, the trail bends right to head northeast and cross into Alberta about 0.9 miles from the trailhead. By now, the trail is almost at treeline. The trees are sparser and shorter, as the trail runs through a mix of rock and trees. Here on the Continental Divide, several lakes can clearly be seen—Lake Adolphus in Alberta, Berg Lake, and several more small lakes. The head waters of Robson River in the snow-covered peaks and glaciers of the Continental Divide can be seen, as the Robson River starts its journey to the Pacific Ocean. To the north, in Alberta, the Smoky River whose waters eventually reach the Arctic Ocean, starts as the Adolphus Lake outlet stream.

Mumm Basin Route continues to climb as it travels over rock now, and is marked by cairns to show the way. The trail soon bends left and crosses back into British Columbia, again on the Continental Divide, and at the trail's high point, about 1.1 miles from the trailhead.

At this point, Mumm Basin Route levels off for about the next mile, as it travels through rocky meadows above treeline. A few streams are crossed and there are high peaks to the right (northwest) of the trail. The views to the left are awesome—Mt Robson, Rearguard Mountain, and many other snowy peaks; Berg Glacier, Robson Glacier, and more glaciers; Berg Lake, Adolphus Lake, and other small lakes; and in general the expansive rugged splendor of the mountains and valleys of the Continental Divide.

About 2.3 miles from its trailhead, Mumm Basin Route begins to slowly descend. As it descends, it gradually re-enters the fir forest. A trail junction is soon reached. Here, Mumm Basin Route ends as it meets Hargreaves Lake Route and Toboggan Falls Route. 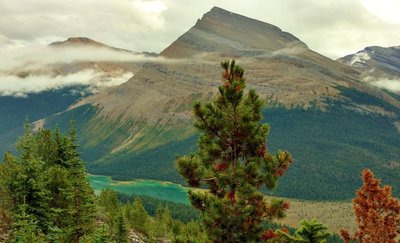 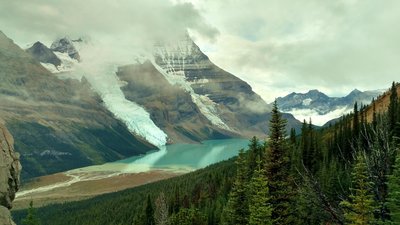 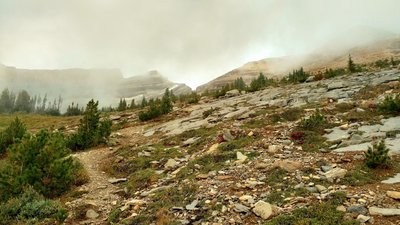