This trail is temporarily closed due to nesting peregrine falcons along the cliffs.

While there are no rivers or waterfalls on this trail, there are many in Cliff Park and it is worth mentioning that swimming, wading, and jumping into the waterfalls and areas above and below waterfalls is prohibited in the entire park. Please don't risk your LIFE. There are costly fines for violating federal law.

Cliff Park Trail is an unblazed trail that parallels the more widely used Cliff Trail that follows a ridge line a little less than three miles alongside the Delaware River Valley near Milford, PA.

A little background is probably helpful. Cliff Trail is a moderately used doubletrack trail from Raymondskill Road to the Milfor Knob Overlook. It mostly keeps the hiker a safe distance from the ledge, and only meanders close enough to key overlook locations where people can safely stand behind wooden railings.

Conversely, this trail (Cliff Park Trail) is not marked in any way but is much more rewarding with its views. It parallels Cliff Trail almost in its entirety, and even joins Cliff Trail in a few sections. It provides the hiker almost constant views but is dangerous if one is not careful. In no portion is it closer than three feet to the edge of a cliff, but that is certainly close enough.

Park at the Hackers Parking Lot and the trailhead will be across Raymondskill Road. There are multiple unmarked side trails in this area, and I have found the easiest to be the trailhead just east of the parking lot. Directly across the parking lot is Hackers Trail, which also has a trail spur that joins Cliff Park Trail.

For the first half mile, most of the trail is through a pine forest with a needle forest floor. This is also where the only significant elevation gain takes place as you climb to the top of the ridge.

From this spot until the end of the trail, the route winds close to the cliff edge with numerous overlooks. If you are lucky and start early, summer mornings may find the valley socked in with a dense layer of fog which completely obstructs the views but is interesting in its own right.

This trail can easily be combined with others in the park to make a longer route.

Please also note that since the route takes the hiker to the cliff ledges, the GPS trackers are not sensitive enough to accurately gauge location. The elevation profile looks extreme in spots but this is not true.

Great area for wildlife - birds, bears, deer, snakes, porcupines and more. The flora is also interesting with a typical hardwood forest with hemlock and pine mixed in spots, and the occasional and extremely rare prickly pear cactus growing from the side of the rocky cliffs. 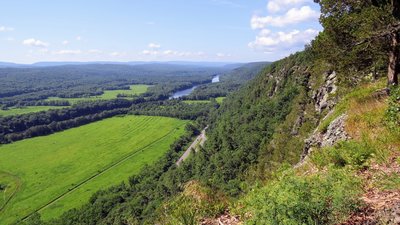 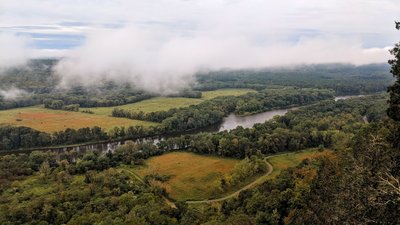 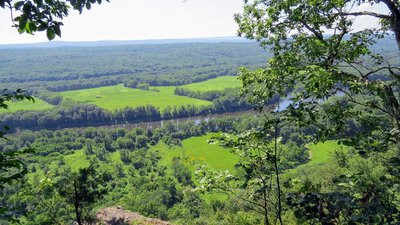 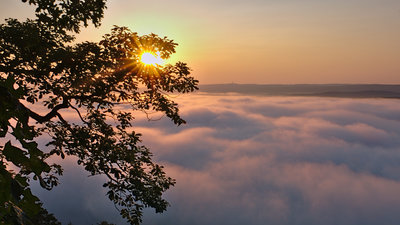 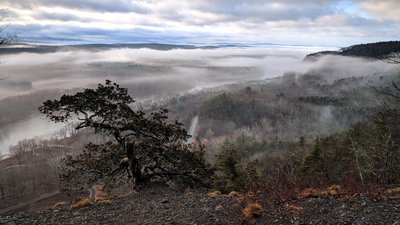