Keep an eye on the weather if you're planing a high alpine venture. In summer months, thunderstorms often roll in during the afternoon, making peak travel dangerous. Get up early so that you can summit and be back below treeline by the time the thunder comes in!

Most people conquer the Grays and Torreys Peaks together from the popular Herman Gulch trailhead off of I-70. However, if you want some solitude along a beautiful ridgeline and some extra miles, then this is the route for you. Oh, and did I mention you'll climb a 13er, Grizzly Peak, on your way there and back?

Access this trail by first taking the Mt. Sniktau Trail located on south side of Loveland Pass. That trail starts climbing steeply right away. You'll top out on your first bump on the ridgeline after roughly .85 mile and about 900 ft of elevation gain. From this point, the trail breaks off to the southeast. I wasn't kidding when I say this route starts out quick!

Your next goal is to climb to the top of Grizzly Peak, a 13er. From that first bump on the ridge it is 2 miles to the top of Grizzly. The ski area you see below you and to the north is Arapahoe Basin, a really fun ski area that some years stays open until the 4th of July. Once you are done taking in the views, you have a scree-filled descent of the backside to a saddle between Grizzly and Torreys Peak.

The ascent of the backside of Torreys is a straightforward, but a slog and a half! According to google earth in 1.1 miles you'll gain 1600 feet of elevation!!! Just to remind you, that is not starting at sea level, you are starting at 12,500 and going up over 14,000 feet! Depending on when you started and your pace, Torreys is the probably the first time you'll see people. The Grays and Torreys Peaks is a very popular route for people to train and to get in their first fourteener experience.

Once you reach Torrey's Peak, you'll return the way that you came. 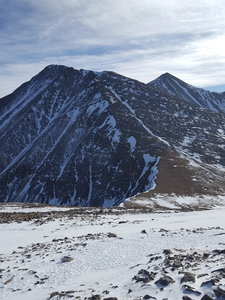 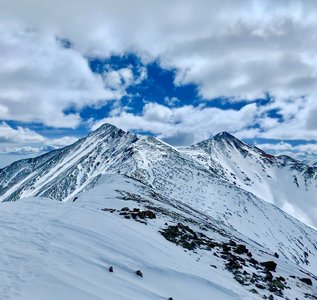 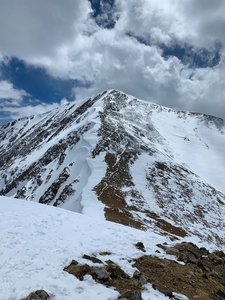 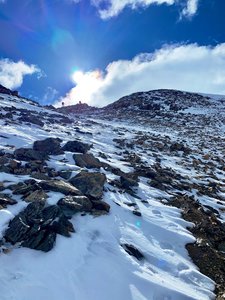 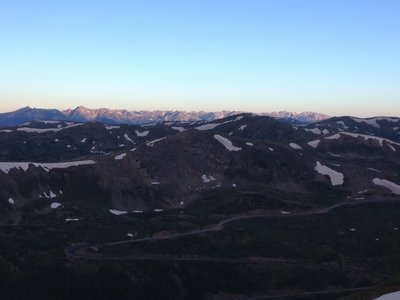