“A steady climb out of Capitol Gorge along rock ledges leads to a viewpoint of the Golden Throne. ”

During periods of high visitation, the parking area may be completely full from mid-morning to late afternoon.

At the start, the trail climbs moderately, and the road soon seems far below. In a short distance, mostly natural steps lead up to a section that winds through large, iron-stained sandstone boulders that have fallen from above. A long flat stretch begins as the trail circumvents a deeply incised side drainage, the first of four encountered along the way. After a short climb, the second flat begins, and the pattern continues.

The next ascent highlights the variable conditions under which the sandstone and siltstones of the Kayenta Formation were deposited. Keep an eye on and around the trail for variety of sandstone examples.

As the next flat begins, the Golden Throne comes into view for the first time, nicely framed by vegetation and the right-hand cliff wall. From the switchbacks that follow, the view east is consumed by a sheer wall of nicely cross-bedded Navajo Sandstone. The next flat is richly endowed with thick biological soil crust that brightens with blossoms as early as late March. In this section, please keep on the trail. Cryptobiotic soil is incredibly fragile, and the damage caused by single footprints can take decades to heal.

The fourth flat ends in a short slickrock grade marked by several cairns. Here the Navajo sandstone wall off to the right bears a shallow dome-shaped amphitheater. The acoustics are such that even moderately heavy footfalls can be heard echoing back from the wall, and normal conversation bounces back without significant loss of volume. The wall, appropriately, is known as the "echo wall."

A short way beyond the echo wall, the trail leaves the lee of the cliffs on the right and ascends a small hill topped by a sign that states succinctly “Trail’s End.” From this vantage point, the Golden Throne thrusts up high in the northeast, though some of its base is obscured. To the east, the Henry Mountains are visible through a gap, and in springtime they will often be snow-covered and handsome.

Hiking time to the Golden Throne will be relatively short, and this is a great route if you're limited on time but want to take in some of the highlights of Capitol Reef. Your journey will be a little quicker on the return, as you'll be descending instead of heading up.

This content was contributed by author Rick Stinchfield. For a comprehensive hiking guide to Capitol Reef National Park and to see more by Rick, click here.

The entire Golden Throne hike passes through abundant trees, shrubs, forbs, and cactus. Of the various plants, Piñons, junipers, ephedra (Mormon tea) and roundleaf buffaloberry are the most prominent.

Mormon tea is one of the most interesting plants in Capitol Reef. Two species have been identified in the park: Ephedra torreyana (Torrey Mormon tea) and Ephedra viridis (Green Mormon tea). In a resourceful adaptation to the desert conditions in which Mormon tea thrives, the plant has diminished the size of its leaves to the point where they are much more like scales, and photosynthesis is carried on in the stems. Ephedras are the sole members of a family called joint firs, a name that is accurately descriptive. They are uniquely recognizable in the Southwest, with slender green and jointed stems, generally vertical and often forming a large plant that can be five feet high and almost as wide. 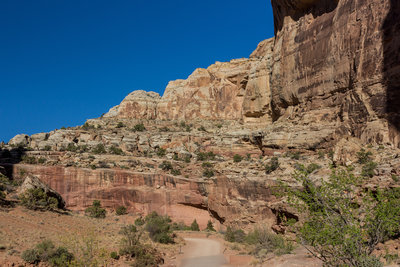 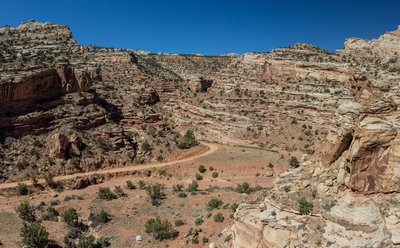 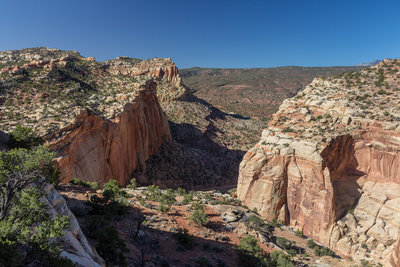 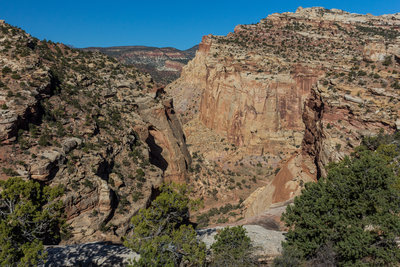 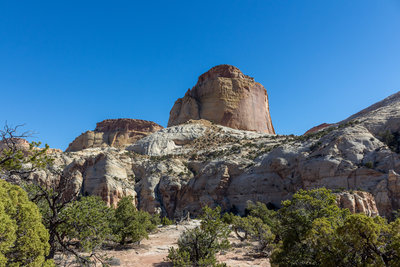 Navajo Knobs Out and Back