The privately owned stretches of the Sauratown Trail, which make up the majority of this segment, are closed for hunting season between November and early January. Hiking the trail during this time period is strictly prohibited.

Only horses are permitted on the trails. Trained service animals are allowed if they are assisting individuals with disabilities.

Camping is prohibited throughout Segment 7 except where designated.

If you plan to leave your car overnight or longer at any of the state park parking areas, you must notify a park ranger. Otherwise they will assume you are lost and start a search for you.

Although the trail is closed during the gun and black-powder deer hunting season from November to early January, it remains open during bow hunting and turkey seasons. Always wear blaze orange when traveling on private property in this segment, and learn more about hunting seasons and regulations before your trip at ncwildlife.org/Hunting.aspx. Hunting is prohibited in Pilot Mountain and Hanging Rock State Parks.

Segment 7 begins in the west at Pilot Mountain State Park, making a near-complete loop around the mountain. East of Pilot Mountain, the MST joins the Sauratown Trail, one of the earliest long-distance trails in the state. Winding through farmland, forests, and country roads, this trail skirts the northern flank of Sauratown Mountain. The trail is unusual in that it is mostly on private lands, and is open to trail users through the generosity of many individual landowners. As you navigate the trail, please be respectful.

At its eastern end, Segment 7 enters Hanging Rock State Park, the third-oldest state park in North Carolina. In the park, the MST passes within a few feet of the summit of Moore's Knob, the highest point in the Sauratown Mountains. The views from the summit fire tower are spectacular! From the rocky slopes of Moore's Knob, the trail descends through oak-hickory forest to Hanging Rock Lake, popular for swimming and boating in the summer and home to a CCC-built pavilion and bathhouse, and on to its eastern end at the Hanging Rock State Park Visitor Center.

This segment provides a sense of isolation that is rare in the Piedmont. There are no towns or stores on the segment, and only a few businesses of any sort. At the same time, much of the trail passes through working farmland, even within a few feet of active farm buildings. The nearest towns for resupply or lodging are Pilot Mountain, about 3 miles north of Pilot Mountain State Park; King, about 8 miles south on US 52; and Danbury, which MST Segment 8 passes through about 4 miles east of the eastern end of Segment 7.

In contrast to the majority of the MST, most of Segment 7 is open to horseback riders, and equestrians make up a large portion of the trail's users and advocates. All of the Sauratown Trail is equestrian trail, and the Corridor Section of Pilot Mountain State Park and the Ruben Mountain Trail (also marked as Tory's Den Trail) in the western part of Hanging Rock State Park are both open to horses. Visitors should be aware of the potential of encountering equestrians and that horses always have the right-of-way. When encountering equestrians, those on foot should calmly greet the rider and avoid quick movements to keep from frightening the horse.

The MST and Sauratown Trail in Segment 7 is generally very well marked with the MST blaze—a 3" white circle—and Sauratown Trail signs. In a few locations, where trail is newly designated or trees have fallen, there may be gaps in the blazing, but these are rare, and the Sauratown Trails Association regularly replaces them. Because the trail is designed for equestrian use, the blazes are often higher than expected on a pedestrian-only trail. The sections of trail within Pilot Mountain and Hanging Rock State Parks, in addition to the white MST blazes, also have a second set of colored blazes corresponding to the state park trail systems. 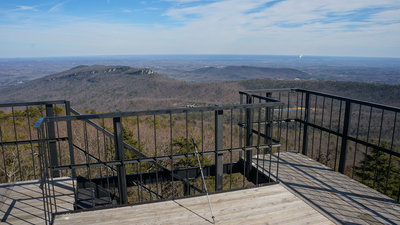 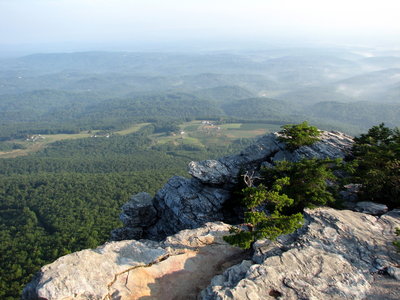 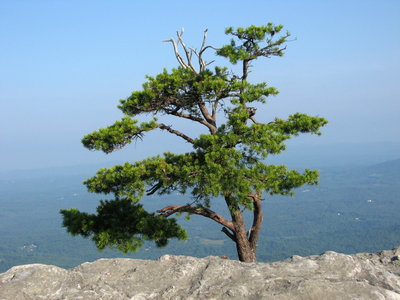 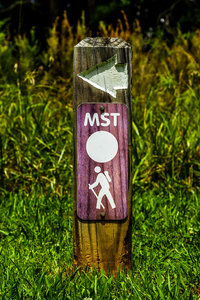 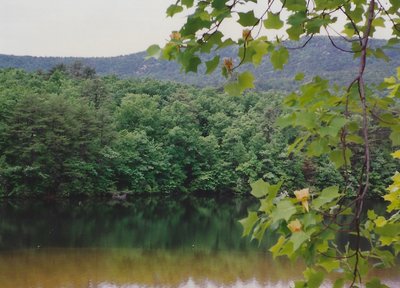