“A remarkable backcountry trail through stark desert terrain with stunning views of the Rio Grande. ”

The waters of the Rio Grande are completely contaminated and undrinkable! No amount of purifying chemicals can make it potable.

While a longer route to tackle in a single day, this route provides some of the most rewarding views in the park. While initially you'll have some steep trail to navigate, you'll soon have enjoyable, plateau hiking ahead of you. Enjoy the views along the whole route, as even the trail portions that you visit twice are spectacular!

Begin the Marufo Vega Trail knowing that breathtaking panoramic views of the Sierra del Carmen mountains and the Rio Grande are waiting just a few miles up the trail. Knowing that, fill up your water bottles and embark on a true backcountry hiking adventure in Big Bend National Park.

Marufo Vega Trail is most commonly attempted as either a comfortable overnight, or rather strenuous single day expedition. If pursuing an overnight sounds more appealing to you, be sure to pick up a backcountry use permit from any of the Big Bend ranger stations. To learn more about backcountry use permits, see the here.
For more information regarding safe and enjoyable backcountry travel, see the NPS Guide to Backcountry Preparation and Safety.

Starting at the trailhead, follow the trail as it climbs along a rocky ridgeline to a plateau above. After reaching the plateau, follow the sometimes poorly marked trail north to the mouth of a clearly visible, large drainage. Ascend the drainage, handrailing a sandy wash off and on before coming to a moderate, switchbacking climb through another drainage. Continue climbing through the second drainage for roughly a third of a mile before reaching a fork in the trail. Head east (right) from the fork, continuing to gently climb as you round the corner to the sight of staggering limestone cliffs to the south.

Finally, you'll have reached the canyon rim and the awe-striking panoramic views it offers of the Sierra del Carmen to the northwest and the Rio Grande below. After taking in your surreal surroundings, begin a steep, 1000 vertical foot descent to a cliff overhanging the Rio Grande approximately 100 feet above the water.

Upon reaching the cliff a junction appears, at which point visitors have the option to either head right along the spur toward a silty beach on the banks of the Rio Grande, or head left to continue on the Marufo Vega Trail (heading northwest) along the clifftop. It is important to note for those traveling to the banks of the Rio Grande along the spur trail that the waters of the Rio Grande are completely contaminated and undrinkable! No amount of consumer-bought water purifying chemicals can neutralize the high levels of chemical contaminants flowing downstream, so again, do not drink it.

Traveling left from the junction along the clifftop, descend gently across typical arid terrain until reaching a section where the river points due north. At this point, look to the southwest for a large, easily recognizable drainage, leading visitors to the first junction. 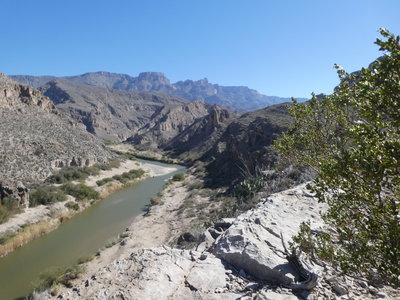 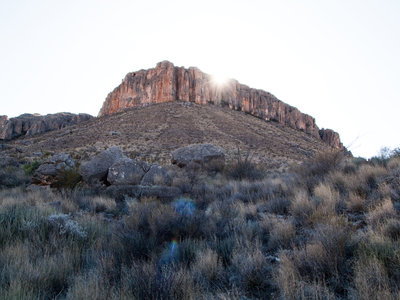 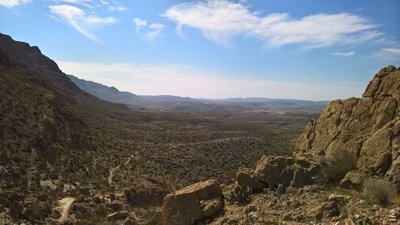 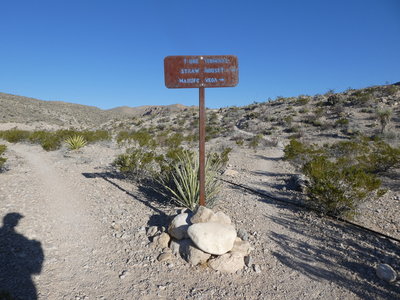 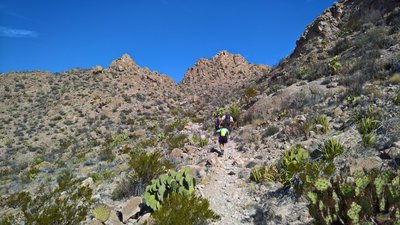 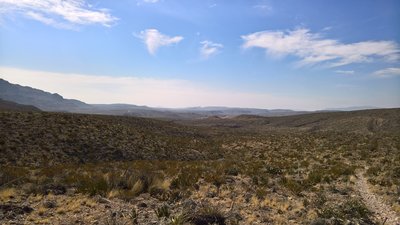 Oak Springs Trail and The Window