“A hardy hike through forests to an impressive overlook of Madison Canyon and beyond. ”

A hardy hike with 1500 feet of elevation gain through mostly lodgepole forests to an impressive overlook of the southern half of the park. Views are limited on the first couple miles of the hike, but become better as you climb. In addition to the views, the trail affords a great opportunity to learn a few historical facts about the area.

The trailhead for this out-and-back hike is located just north of Madison Junction on the road to Norris. It is a hardy 1500-foot climb to the top, but never too steep. There is no water source on this trail, so carry plenty with you.

The wide trail begins to climb almost immediately and it does not let up until you are almost to the top. The fairly dense lodgepole pine forest obscures the views for the first 2.3 miles, then the trees thin a bit and nice views are had of the rivers below and National Park Mountain (on the opposite side of the canyon). This “mountain” is really just the dark face of the Madison Plateau rising steeply above the river. It was here on September 19, 1870 that members of the Washburn Exhibition camped their last night in what two years later would become Yellowstone National Park. Legend has it that the party discussed the wonders that they had witnessed and agreed that the area should be preserved from despoliation and private ownership. The name National Park Mountain commemorates the birth of Yellowstone and the National Park idea. Some have said, America’s best idea! Although contemporary historians have questioned the factual basis of the story, the legend lives on.

The trail continues to climb and ends at the 3.4-mile mark with a fine overlook. From here it is possible to see the Tetons on the horizon to the south, the thermal steam rising from Midway and Lower Geyser Basins, and the full sweep of impressive Madison Canyon to the west.

At your feet is the confluence of the Gibbon River and the Firehole River. Together they form the headwaters of the Madison River, one of three rivers that join near Three Forks, Montana to form the Missouri River. Lewis and Clark named these rivers in 1805 to honor three individuals who were important to the expedition – President Thomas Jefferson, Secretary of State James Madison (who negotiated the Louisiana Purchase), and Treasury Secretary Albert Gallatin (who paid for the trip). Once you have enjoyed the view, retrace your steps to the trailhead.

Purple Mountain has an interesting history. Wildfire was a significant motivator for building trails and lookouts in Yellowstone. In 1910, huge fires burned more than 5 million acres in western Montana and Idaho, killing 85 people. To detect forest fires early, before they got out of control, Yellowstone constructed 3 “primary” fire lookouts on Mount Washburn (in 1921), Mount Sheridan (1926), and Mount Holmes (1931).

Beginning in 1931, ranger-naturalist stationed at Madison Junction were assigned fire patrol, three times a week climbing Purple Mountain to look for smoke. They began a practice of allowing park visitors to join the hike – and Purple Mountain became one of the first “Ranger Walks.” Later a “secondary” lookout station was built here to supplement the primary lookouts. If you scout around the area you may find evidence of the lookout’s former location. Other secondary looks include Bunsen Peak, Observation Peak, and Pelican Cone. 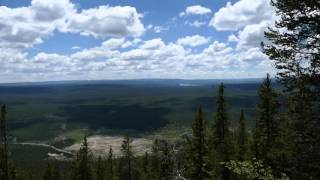 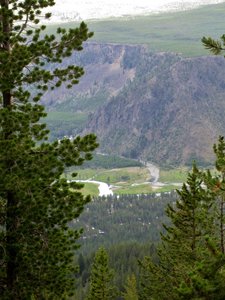