Boulder Gulch and Route 110A Loop

Easily accessible loop from Silverton that balances awesome, challenging alpine terrain in the first half with dirt roads in the second half. The Boulder Gulch Trail makes a steep, smooth ascent through classic alpine terrain. The pass between Storm Peak and Tower Mountain is reached after about 5 miles; the scenery at the top is simply astounding with an incredible view in all directions. From there, a steep, technical descent gets you down to the Velocity basin and a beautiful lake. The gears then change for the rest of the route as you hike along Route 110A (a dirt 4WD road). This takes you through the valley in a long, gentle descent back to Silverton.

Parking is available right by the Silverton Memorial Park. Many post-hike refreshment options are nearby in Silverton.

Geared more toward runners, this might not make for the most enjoyable hike.

Parking is easily accessible by Silverton Memorial Park. From there, the route follows the road heading east out of town, zig-zagging once before becoming the Boulder Gulch Trail. This is relatively flat for about 1.5 miles; the trail then reaches the actual Boulder Gulch creek, crosses it, and begins climbing steadily on singletrack. After one early switchback, the trail heads northwest briefly and then turns northeast, all while continuing to climb. The trail goes through a few patches of forest, but, in general, is mostly exposed.

After roughly 4.5 miles, the trail makes a sharp turn to the west, crosses the creek, and then switchbacks to the east before finally resuming a relatively straight climb due north. Relatively small snow patches became frequent at this point in mid-June, which made trail navigation a bit more challenging. However, there are generally a steady set of cairns to guide the way. A final, steep portion of the climb brings you to the pass between Storm Peak and Tower Mountain at just over 13,000 ft. The views in all directions are amazing. The view of Velocity Basin is to the west is especially gorgeous, and you can see route 110A, the dirt road that eventually winds back to Silverton.

But immediately after the pass, a steep, technical descent heads north before quickly veering back southeast. With the snow patches and technical terrain, navigation can be tricky here; take your time. The trail eventually loops back north to take you through a saddle point between the pass you were just at and Emery peak. After heading northwest and then bending back southwest at about mile 6.5, the trail begins a fun descent down to the Velocity Basin Lake.

From here, the dirt road portion of the route begins. Heading north out of Velocity Basin, the road is initially a fairly steep descent before the grade gradually lessens. The scenery is still fantastic as the road winds west down the valley with peaks on all sides. Dust can sometimes arise from offroad vehicles occasionally passing by. Depending on the season/time of day, this section can get hot due to its exposure. The road will take you all the way back to Silverton, thus completing the loop. 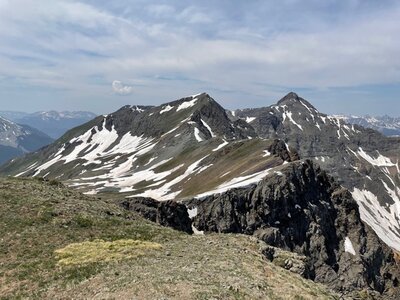 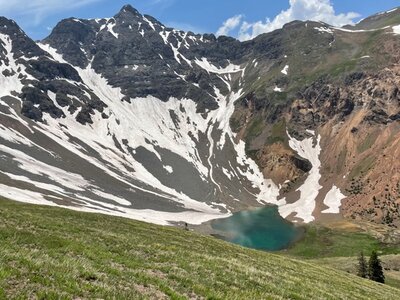 All Clear 18 days ago See History

Weehawken Trail #206 to Alpine Mine and Overlook