“A trek up to Black Rock State Park's namesake. ” This loop is the main hiking attraction in Black Rock State Park. Utilizing both the Mattatuck Trail and Red Blaze as well as a few other footpaths in the park, it takes a tour of the best that the park has to offer. In addition, it provides access to the scenic views of the park's eponymous Black Rock

This is the main hiking endeavor in Black Rock State Park. However, it is not the only thing to do while visiting. The park also features picnic, swimming, and fishing areas as well as a developed campground.

This route both begins and ends at Black Rock's unique footbridge. This gives access to the trail from the parking area, the swimming area, and the campground. It then continues on the unblazed footpath until it meets with the blue-blazed Mattatuck Trail.

It continues on the Mattatuck for only a short while before splitting off to the north on Red Blaze. The trail then begins to ascend in a steady, but not unreasonable fashion. While Red Blaze is not the best-maintained trail, this area has a wonderful feeling of seclusion and wilderness.

The trail then levels off as it heads towards Black Rock. Be careful, as this area has a few hidden cliffs and crags before it reaches the viewpoint. Finally, the trail passes Black Rock which is as notable for its rock face as much as it is for its views.

The trail then begins to descend steeply and continues to do so for the rest of its run. After descending and finally leveling off the route departs from the Mattatuck and returns to the footbridge by way of the park's footpaths. 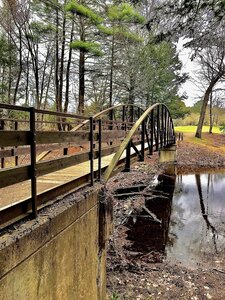 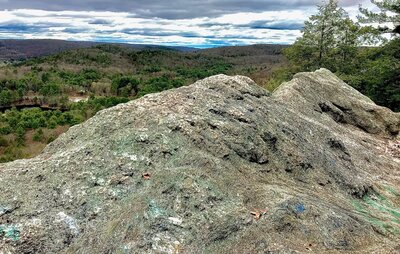 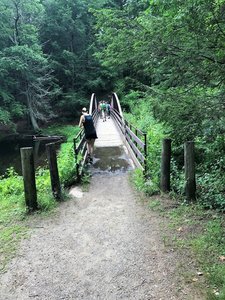 Rand's View Out and Back