“Off-trail route visits many timberline lakes with lots of low flowers and sweeping views in all directions. ”

Wilderness permits are required with daily quotas. The Piute Pass Trail is very popular. Normally a percentage of permits are reserved as walk-in permits, but these are not available in 2020 because of Covid-19.

The entire plateau is above 10,000 feet so campfires are never allowed except in the lower parts of French and Piute Canyon. In 2020 no campfires are allowed in the Inyo National Forest, except in designated camp grounds.

A huge triangular plateau is surrounded by Piute and French canyons and the ridge containing Mt. Humphreys and Four Gables. It has 29 named lakes, all between elevations of 10,800 and 11,800 feet. Wherever you go, there are views of 13,000 foot peaks that surround the plateau on all sides. Two short official trails reach only 4 of the lakes.The reason there are so few trails is that there is little need for them. The slopes are mostly gentle and the vegetation is sparse which enables hiking a variety of ways to any lakes of your choice. The mapped route as a sampler for wandering among the lakes. There are many ways to cut this route shorter or to visit additional lakes. One exception: "Puppet Pass" is the only manageable way for non--rock climbers to get down from the Desolation/Mesa lake level to the level goes from Alsace to French lakes.

About 50 yards east of Piute Pass, a fairly steep trail-of-use climbs for about 1/4th mile. After that, it is mostly a gentle climb past unnamed lakes to Marmot and Humphreys lakes, directly below the steep cliffs of Mt. Humphreys. From there it's a 200 foot elevation gain to the ridge that leads directly down to Desolation Lake. Pass around the lake on the south side and over a low slope to Mesa Lake, which has great views of the Glacial Divide. Then climb up the stream. Just before the 2 tarns, climb up to Puppet Pass above Roget Lake. The correct spot has a dirt trail-of-use leading over the edge and down about 15 feet. At the end of the dirt, turn slightly right and descend over large talus blocks. Pick a route where you can see that there are no sudden drops. For two non-rock climbers, aged 75 and 76, this descent was difficult and somewhat scary, but doable.

From the bottom I chose to pass around the south side of Puppet Lake. Alsace Lake looked like a beautiful place to camp. There is another steep drop to Elba Lake, but it is not nearly as bad as Puppet Pass. The easiest way that I saw, started from about 1/3rd of the way around the north side of Puppet Lake. At Elba, the trail from French Canyon leads past Moon and L lakes and many acres of lupin. From the gentle ridge north of L Lake, it is a short, easy climb to Steelhead Lake. Between Steelhead and French Lakes, there is a lot of talus on the eastern slopes. As you descend, search for green slopes that take you up and around the ridge to the outlet from French Lake. Then make a gentle climb up and across a low ridge and down to Pine Creek Pass.

Many low flowers, especially Lobb's , Pussy Toes, Sierra Shooting Star, Sky mousetail and others that I could not identify. 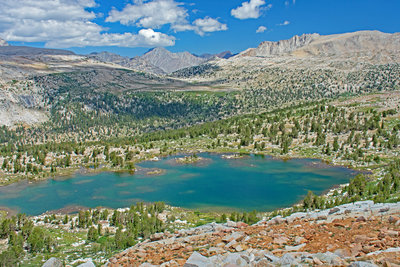 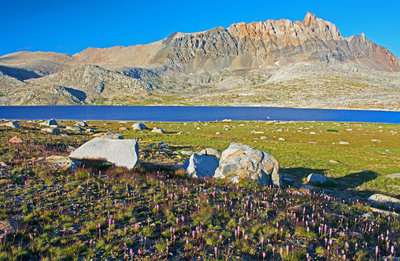 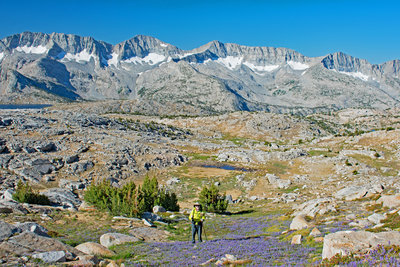 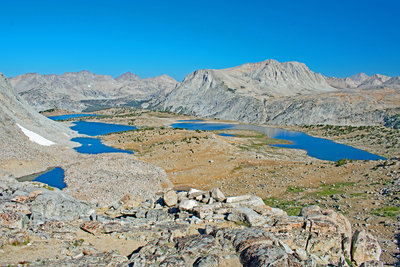 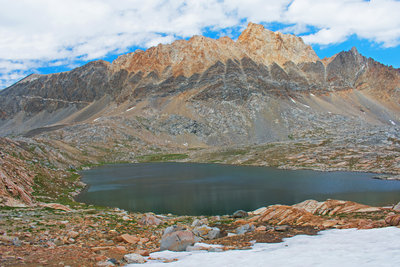 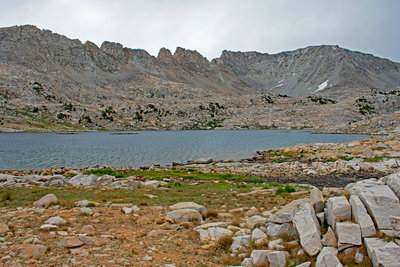 Aug 1, 2017
Valerie Norton
Out to bag Pilot Knob. Harder than I expected: https://valhikes.blogspot.com/2017/08/north-to-south-desolation-lake-and.html