“A way to see the park in its entirety via pavement and dirt trails and a healthy dose of hills. ”

This route contains pavement pathways as well as dirt trails all part of Boyce Mayview Park. The route largely runs the perimeter of the park then cuts through the heart of the wooded area in the park. This route climbs and descends several large hills in the park, and the trails used are generally some of the least muddy in the park. You'll pass by numerous seated lookout areas, playgrounds, and several other trails within the park which means future options abound.

Start at the parking lot located off of Boyce Road next to Ardolino Restaraunt. Start up the paved Perimeter Trail which climbs to one of the highest points in the park before opening into another parking lot next to the Boyce Gardens. From here, continue on the paved Perimeter Trail as it descends and eventually terminates at Morton Road. Do not cross the road. Instead, continue onto Morton Falls Trail which immediately switchbacks down to a bridge and crosses the creek. Once across the bridge, turn right and continue on Morton Ravine Trail as it slowly climbs another large hill and reaches "Split Earth Point", one of many seated vantage points in the park.

From here, turn right and head down the hill via Switchback Trail until it terminates at another bridge. Cross the bridge and follow the trail a short distance to a wide dirt trail, Ravine Drive. Turn right and climb Ravine Drive until it empties into a grassy opening. Shoot up the short steep hill to the left to access the parking lot above, then follow the lot to the far side where the paved Perimeter Trail begins again. Follow the Perimeter Trail up, then later down, the hill and continue to the Baker Park area (playground and baseball field area), staying left at any intersections along the way.

After crossing a bridge and reaching the far side of a large open meadow, turn right off of Old Farm Road Trail onto Between Two Worlds Trail. Start down Between Two Worlds Trail a short distance before turning left onto Chartiers Floodplain Trail and crossing a creek/draw. Continue on Chartiers Floodplain Trail until reaching Woodlands Trail. Veer left onto Woodlands Trail and follow it back to Ravine Drive once again. Once there, use Ravine Drive to access the bridge nearby and reach Switchback Trail again. Use Switchback Trail to gain the hilltop again, then continue parallelling the ridgeline via Sylvan Ridge Trail for some time until reaching a linear clearing cut through the woods at a perpendicular angle. Cross the clearing and pick up Old Oak Trail to continue along the ridgeline until the trail empties at the top of the hill into the Boyce Gardens area. Once here, pick up the paved Perimeter Trail again and head back down the hill to the original start point. 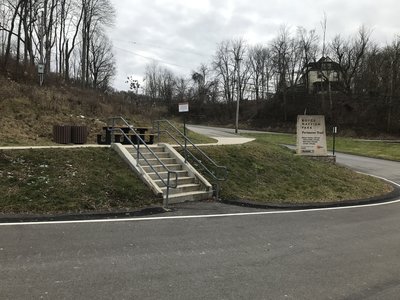 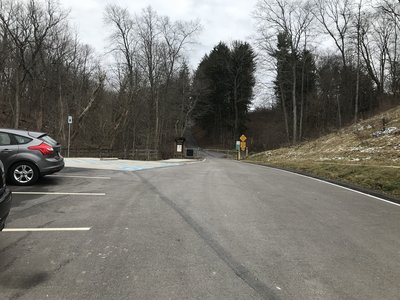