Wasserauen to Ebenalp via Aescher

“Visit Aescher (featured on the front page of National Geographic's "Places of a Lifetime") on your way to Ebenalp. ”

Not to be attempted with snow. Restaurant Aescher usually open May to November.

You can reach Wasserauen by train or by car. There is a parking lot and during busy days, some farmers rent out space on their meadows for parking as well. On good-weather weekends, all the available parking spaces can fill up very quickly from very early in the morning!

Aescher definitely is the most famous restaurant you pass on this route. It acquired world fame when Ashton Kutcher mentioned it on his Facebook page and also when National Geographic chose to feature it on the front page of its book, "Places of a Lifetime." It is a marvel. But bear in mind that so much fame also does have its downside: the number of visitors exploded, but due to its location, it can not expand its facilities. So it can often be very crowded and you may have to wait to find a place and be served.

There are multiple possibilities to get from Wasserauen to Ebenalp (or the other way round). On this one, you pass Aescher, the world famous restaurant which made it to the front page of a National Geographic book. From time to time, you might run into world celebrities at Aescher. Aescher, however, is not the only highlight; the view is not to be missed either.

There is a cable car right opposite the train station in Wasserauen. It will take you up to Ebenalp (or down to Wasserauen) if you don't want to hike both ways.

Start from Wasserauen and head down the street for about 300 meters in the direction from which the train arrives. Then turn left towards a farmhouse. In front of the farmhouse, a small path leads you on the right side over the meadow to the trail which vanishes in the woods. Just follow this trail and after 40 minutes or so, you'll come out of the woods. On the meadows which you cross for the next 15 minutes, there may be some cows. Don't be afraid; they are much used to hikers. Just move around them if they block the footpath.

After the meadows, you come to a broad gravel road, which turns rather steep pretty quickly. Less than 200 meters into the steep part, a path forks off to the left. This is the path you want to follow.

A short distance after Aescher, there is a huge cave. You go through the cave. If it is very early in the season, there might still be huge masses of snow on the other, shady side of the cave blocking your way. Attempting to climb over such a wall of snow can be dangerous; in such a situation you might want to turn back or check out the other path from Aescher which does not go via the cave.

After the cave just follow the path. It's easy to find.

Ebenalp attracts a lot of hang- and paragliders. They usually start right behind the cable car station. It can be interesting to watch them for some time. 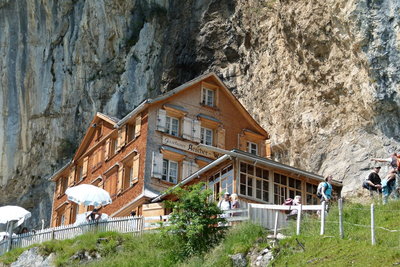