Due to current global events, we are operating with reduced functionality. We appreciate your patience until we are once again able to manage updates and feedback.

In the meantime, we encourage you to provide trail ratings and conditions as you get outside safely. Thank you. “This section of the NET extends from Lake Wyola to Route 2.”

This section of the New England Trail starts off Lakeview Road, near Lake Wyola. t crosses through an open field in the Carroll Holmes Recreation Area to the northwest corner. It eventually turns right onto Old Egypt Road, then borders the edge of Fiske Pond Conservation Area. It travels over various woods roads, the last being Hemingway Road to Montague Road.

Most of this trail is signed as Metacomet-Monadnock (M & M) Trail, though these two trails might follow the same corridor. After crossing over Montague Road, the trail turns left to follow along the Carlton-Dirth Trail. When it arrives at the Ruggles Pond Loop Trail, it coincides with the west spur to the parking area at Wendell State Forest.

In a short distance from the parking area, there'll be a shelter on the right. The water source is the outflow brook from Ruggles Pond (in front of the shelter); the closest outhouse is located at the parking area. The trail continues following old woods roads through a small area called Hidden Valley Memorial Forest. Lynn's Falls Trail can be used as a small alternate to the NET, but the waterfall appears to be seasonal. The dry rock canyon offered no waterfall when I went in late August.

The trail turns right onto Jerusalem Road, then quickly turns left uphill (above the stacked cliff). It travels along the ridge, passing by two lookouts (both on the left). 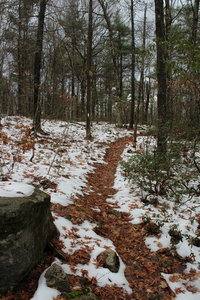 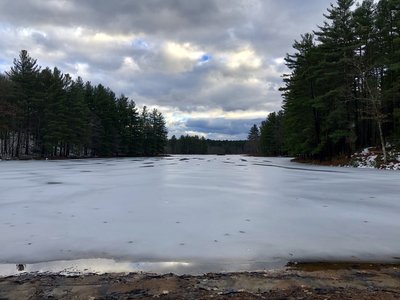