“Possession Camp Trail keeps you looking up and down with beautiful valleys, shoe-grabbing plants, and boulder climbs. ”

This is a wilderness area, so federal rules apply: fs.usda.gov/recarea/mnf/rec….

This 3.2-mile-long trail shares a flat start and end with a rocky middle of steep terrain, but little elevation gain. The trail is not marked but sufficiently worn as to be obvious. The entire trail is shaded in the summer with vegetation lush enough to be almost in constant contact.

There are beautiful views of the valley below and many picturesque, fast-running streams with waterfalls. The section between crossing the two runs has a large amount of stinging nettle and greenbrier vine, so take care traversing the steep slope and consider long pants. Much of the time, you are accompanied by the sound of these streams, such as Otter Creek.

Starting at the north end or junction with Green Mountain Trail (TR 130), there is a flat, open campsite with Norway spruce providing protection and shade. Do look for cairns at this junction for assistance and when crossing Possession Camp run and the unnamed run on the south end of the trail. The northern flat section is a leisurely path through the rhododendron forest with the descent marked by rough, natural steps between two large boulders.

Crossing the first run requires a climb over boulders which are slick. Sometimes the trail sounds and feels hollow as you walk over crevices covered with vegetation. The middle section traverses across a steep slope. Do take care, since this section of the trail has little benching and an abundance of stinging nettle and greenbrier vine which indeed will sting and tug at your shoes. Long pants are well justified here.

The southern unnamed run has an even larger boulder climb with even more character than the Possession Camp run. From here, the trail follows an old grade to meet up with Otter Creek Trail (TR 131) through more rhododendron forest along with mellifluous sounds of Otter Creek.

Eastern deciduous trees such as maple, oak, birch, cherry, and mountain laurel with Norway spruce. There is a lush understory of various plants dominated by ferns and rhododendron. There are deer, rodents, butterflies, and amphibians. 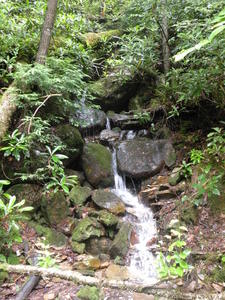