There are no fees, restrooms or garbage cans. While the sign at the bottom says that dogs must be on leash, no dogs are allowed in San Bruno Mountain State Park. This would become an issue if you met anyone higher up.

The San Bruno Mountain Ecological Reserve, which is managed by the California Department of Fish and Game, is a recognized botanical hot spot with hundreds of different varieties of plants--many rare and endangered. It is also home to large numbers of butterflies, including rare or endangered types. A biologist doing research there told me that this this is some of the finest native grasslands in California.

The trail starts on Quarry Road at an Ecological Reserve boundary sign, just east of the small concrete catch basin where Owl Creek meets the creek coming down from the Quarry. The first part of the trail climbs through the center of reserve. However, much of the ridge is grassland, in contrast to the canyons on both sides, which are heavily covered with trees and brush. The trail is generally steep, and very steep in some places. It climbs out of the reserve and on up to the Ridge Trail in San Bruno Mountain State and County Park. The center of the trail goes though a large patch of blue blossom. It was clear in the early spring, but by mid-May, the branches at arm height were encroaching on the trail.

The upper end of this trail starts from the San Bruno Mountain Ridge Trail, about half-way between the 1.0 and 1.5 mile markers. The start is on a small hill just east of a large rock that is on the San Francisco side of the ridge.

I like this trail because it has a wilderness feel, with views up the wild Owl and Buckeye canyons to the top of the ridge. There are times in the spring and summer when the flowers are magnificent. At the right time, large areas of the hills are golden, because they are covered with Lasthenia californica (Goldfields). After a couple of weeks, while the goldfields remain, they are less visible because other grasses and flowers have grown taller. On clear days, there are spectacular the views of San Francisco and the Bay.

About 100 yards up from Quarry Road, the Owl Trail branches off to the right (west). It goes up into the Owl Canyon portion of the Ecological Reserve and then cuts back to end about 0.3 miles up our trail. About 20 yards below the high end of the Owl Trail, another trail branches off in the opposite direction (east) to explore Buckeye Canyon. Both of these trails wander through the canyons of the Ecological Zone and cross the small canyon streams. Both are narrow, but well-built, with switchbacks and large stones used as steps. They are cleared just enough to allow hikers to pass through in single file.

A botanical hot spot for native places. Beautiful fields of poppies, sheep sorrel, phacelia, goldfields, lupine, mule-ears, geraniums and other colorful plants. There are large numbers of butterflies and many raptors 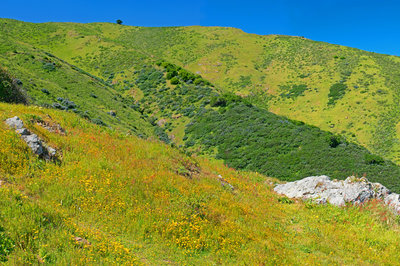 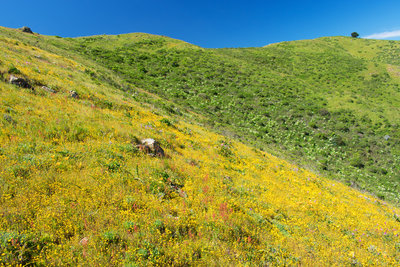