Farther into the park, north of here, there are a lot of coyotes, and they sometimes attack small dogs that are not close to their owners.

The Mussel Rock trail starts from a parking lot, 200 feet in elevation above Mussel Rocks. It ends at the rocks themselves, almost directly below the starting point. Many people park at the top just to look at the spectacular views. It is a superb place to watch sunsets. But if you are willing to hike, I think the sunsets are even better from just above Mussel Rocks.

At the north end of the parking lot, go through the gate that has a sign asking you to close it after passing through. Beyond the gate, look at the houses above. They have incredible views, but, for the Bay Area, they are not extraordinarily expensive. That is both because the cliffs are eroding and because this is where the San Andreas fault reaches the ocean. In fact, it is the closest point to the epicenter of the 1906 quake.

The trail drops a little farther to the most popular paraglider take-off site. When the conditions are right, there may be a dozen or more gliders in the air.

Take the fork in the road that leads down to Mussel Rocks. This is a one of the best places in the area to watch waves crashing on the rocks, especially when the surf is high. When the tide is low, there is a small but beautiful tide pool just beyond the end of the road.

Beyond the tide pool is the oldest "highway" tunnel in California. There is a nearly continuous stretch of beach for 12 miles, from the Cliff House in San Francisco to Sharp Park in Pacifica. The primary obstacle along this route is Mussel Rock and the adjacent points to the south. In 1874, Richard Tobin had three tunnels blasted through these points and a few more through obstacles farther south. For a short time, he was able to drive a 2-horse team at beach level from the Cliff House all the way to his country beach at Pedro Point. The family used the route three times before it became impassible when Pacific storms massively rearranged the sand and caused the collapse of at least one tunnel. Now called, Tobin's Folly, the tunnel here at Mussel Rock is the most obvious remnant of all of this construction. During an extreme low tide, it is possible to enter the tunnel, but it is never possible to hike to the beaches on the other side.

birding.sequoia-audubon.org… has a list of over 60 species of birds found in the park. The park also has great displays of wildflowers. Whales pass by going south during December and January and north during March and April.. 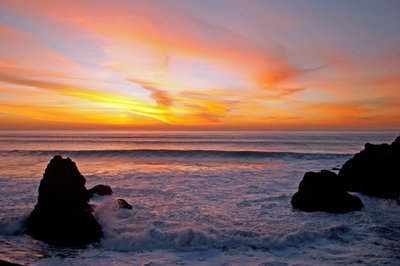 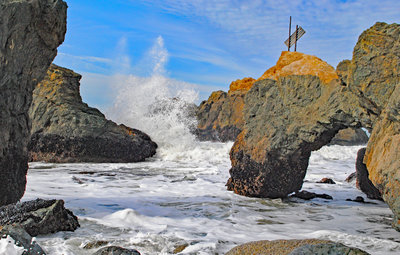 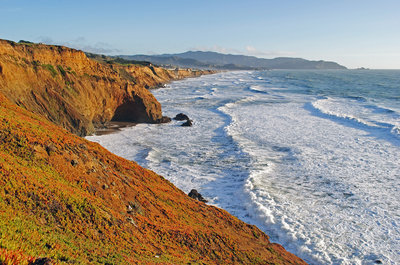 Jul 26, 2020
Vivian Wong
This was super easy, wide dirt paths super short and sweet, but quite amazing that it's so close.