Points of Interest along this section: Big Frog is definitely the highlight of this section. Also of special note is a rocky knife edge outcrop just south of Chimneytop about a mile north of the crest with great views toward Copperhill. The “Green Tunnel” on the west slope of Big Frog is a quarter mile straight stretch of leafy tunnel through dense rhododendron with a view from end to end.

Trail Description: From the top of Big Frog at mile 83.1 (WP 93, 4224’), the Trail leads down the northwest slope of Big Frog on the BMT. It soon runs level on the second hump of Big Frog with some nice camping sites but without water. The trail then descends down the northwest end of this second hump, then loops back around to the north slope heading east then north. Along the north slope of Big Frog is the “Green Tunnel,” a 1/4 mile straight stretch of rhododendron. Watch for an intersection of the somewhat indistinct Big Creek Trail coming in from the west at mile 83.9. At mile 84.2 the trail reaches a knife-edge rocky outcrop with great views to the east. Shortly past this viewpoint, the trail goes around the west side of Chimneytop then regains the ridgecrest to the north of Chimneytop. At mile 85.0 (WP 94, 3290’), the Big Frog Trail goes left down the west slope of the ridge. The BMT continues straight onto the Fork Ridge Trail. Remember, this is a Wilderness area so there are no blazes and few signs. The BMT generally follows the ridgeline until it comes to a T-intersection with the Rough Creek Trail at mile 86.8 (WP 95, 2260’). The trail turns left and continues down the west slope of the ridge to the West Fork of Rough Creek at mile 87.3 (WP 96). It turns right onto the West Fork Trail after crossing the creek. Follow the BMT along the creek downstream. At mile 88.7 the trail leaves the creek (1657’) and heads up a side branch to the left to slowly ascend to FS 221 at mile 89.6 (WP 97, 1900’). Straight across FS 221 is a trailhead for the Tanasi Mountain Bike Trail System.

Campsites: Several good campsites are along this section. The most spectacular is on Big Frog (WP 93). There are also a couple campsites without water along the ridgeline between the two humps of Big Frog. There are several possible LNT campsites along the edge of the West Fork of Rough Creek.

Water Sources: Water is intermittently available near the campsite on Big Frog (A). Also water can be found 0.2 miles down the Big Frog Trail after it leaves the BMT at the Fork Ridge Intersection. The water is down slope to the right near a big oak with an indistinct trail leading to the source (WP 98, A). Water is also available 0.7 miles down the Fork Ridge Trail at mile 85.7 down the west slope following an indistinct unmarked trail (WP 99, A). Once reaching Rough Creek and its tributaries, water is plentiful in several spots (A). 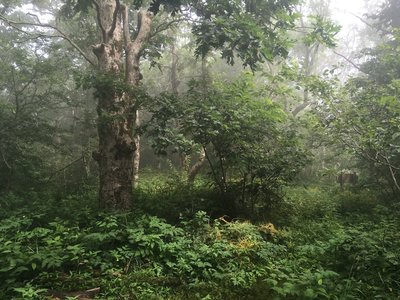