This trail takes you to Cave Peak, but I believe it is more commonly referred to as Pyramid Peak. The trail goes up a steep section of the gas pipeline that is sometimes skied in winter. The trail starts about a mile and a half up the Mueller Park Trail.

Note that there are several descents from Cave Peak, such as one leading into North Canyon, but all of them (except for the one you came up) lead to private property or private roads that have been recently closed due to vandalism. It's quite unfortunate.

This trail, as far as I'm aware, is the last possible way to the peak that avoids private property. Of course, until the peak itself is claimed by a private land owner (it would not surprise me); there will probably always be a way you could bushwhack to the peak. If it was completely surrounding by private property, but not claimed as such, then I guess you'd have to parachute in. Better to take a chopper so you could get out. If, however, the air-space gets privatized, you're out of luck until mankind invents molecular transport.

From the peak, there is a trail heading east along the ridge-line towards Rudy's Flat, but it turns into a bushwhack pretty quick. 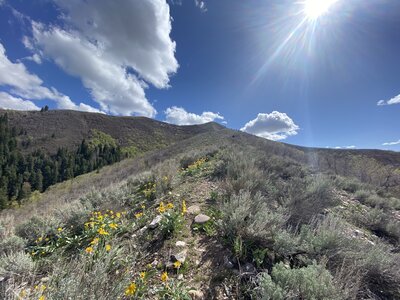 Elephant Rock Out and Back