“Stairs, lots and lots of stairs—some wooden, some stone—but quiet and scenic as well. ”

The trail is named for an interesting rock formation, a "balanced rock" that you'll hike directly past.

The Balanced Rock Trail has the interesting distinction of being the steepest trail at Natural Bridge State Resort Park. Because of this, the trail is one of the least-trafficked (at least the portion above the balanced rock) at that park—although I have no numbers to prove that, it's fairly obvious when you only pass a couple of other users during peak seasons. Many people to hike from the Lodge to the Balanced Rock and then turn back, so that section of the trail can be busy.

The trailhead is located off of the sidewalk behind the Hemlock Lodge. You'll face your first set of rock stairs right off the bat, barely a warm up. You'll be somewhat rewarded with a view of a cave entrance, but because of vandalism and "White-Nose Syndrome" among bats, the cave is not open to the public any longer. As I understand it, tours can be scheduled, but I'm not certain about the details.

As you pass the cave you encounter more stairs. It's only a short jaunt to the Balanced Rock from here, though. You'll see it come up on your left side. It's really hard to miss. A small wonder of geology, due to the way the rock was weathered and eroded, you wind up with one of the best examples of a pedestal rock east of the Rocky Mountains.

From Balanced Rock on, it's up, up, up. You'll hike up past the base of a sandstone cliff known as "Rocky Point." From there, it's on up to where you'll pass the Sand Gap Trail junction and shortly arrive at the CCC (Civilian Conservation Corp) Wooden Shelter located near the Natural Bridge itself.

I've encountered various lizard and salamander species while in the park. Occasionally I have observed deer, raccoons, opossums, and squirrels while camping, hiking and picnicking at the park. Natural Bridge State Resort Park is home to several species of wildflowers and hosts wildflower viewing events every spring. 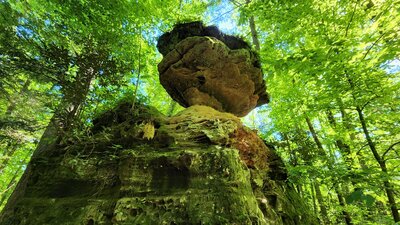 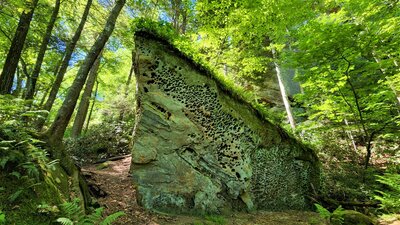 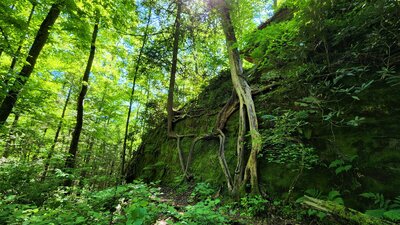 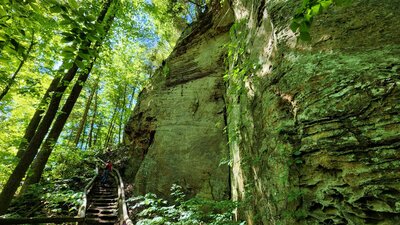 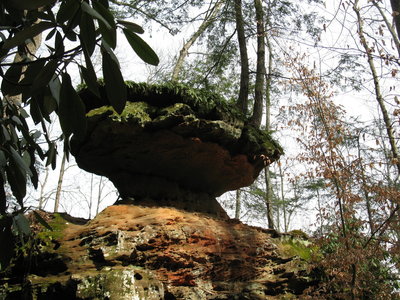 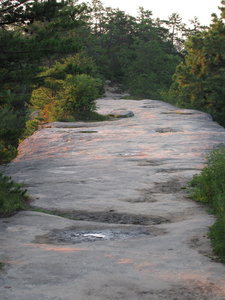 All Clear 42 days ago See History