“A steep, rugged climb to the top of Box Elder Peak, a lesser-known but incredible peak in the Wasatch. ”

This trail gets very steep, although there is no technical climbing or much scrambling involved.

This trail branches off of the Box Elder Trail #044 on the south side of the peak to summit the peak from the south end. The first half mile, after branching off from the main trail, heads up towards a saddle in between Box Elder and South Box Elder, crossing over a number of erosion prevention berms that were built into the side of the mountain.

In this last half mile, the trail gains approximately 1000 feet, climbing over lots of talus, and several times the trail braids and becomes somewhat hard to find. However, as long as you head up and along the main ridge, the trail is easily found again if you lose it.

Before too long, the trail arrives at the top of Box Elder Peak. The views from the top are pretty incredible, with great views of Lone Peak, the Pfeifferhorn, White Baldy, and the associated peaks on that ridge south of Little Cottonwood Canyon. The views to the south of Mount Timpanogos all the way down to Mount Nebo are pretty incredible too. And even on Box Elder itself—the view down into the cirque on the north side of Box Elder is pretty incredible, with clearly visible folding in the rock formations within the cirque and beautiful meadows spreading out below.

Although this isn't quite as well known as some of the peaks around it, it is one of the most impressive and beautiful peaks in the area. 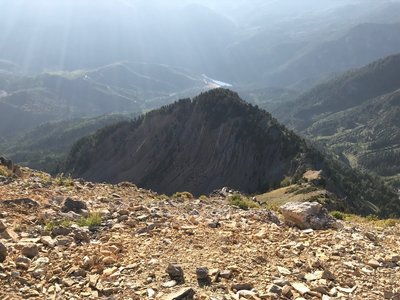 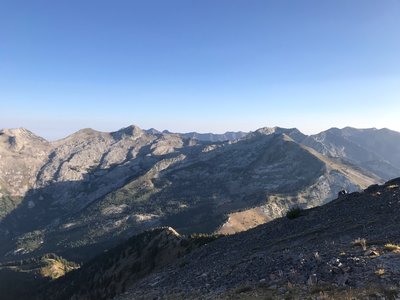 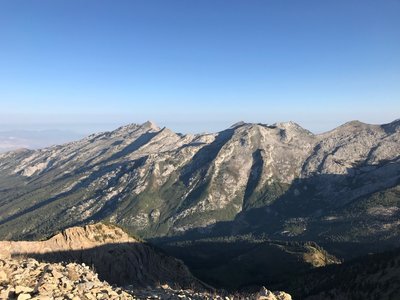 Sep 7, 2020
Daniel Butters
Went off trail for a little bit in between White Baldy and Pfeiff. But other than that pretty smooth sailing, did some 5th class scrambling. 13mi — 6h 00m