“A challenging off-trail route to the highest point in Northern California's Siskiyou Wilderness. ”

This trail is within the Siskiyou Wilderness and the usual federal wilderness area regulations and restrictions apply here. Practice Leave No Trace (LNT) backcountry skills and ethics. Camp 100 feet from fragile areas; bury human waste at least 200 feet from water, trails, and campsites. Trailhead access is limited by gate closures and snow during the wet season (to stop the spread of the Port Orford fungus), generally mid-October through mid-June.

This is an off-trail scramble from the shores of Raspberry Lake to magnificant views from the summit of Preston Peak, the highest point in the Siskiyou Wilderness. It can be done as a long (10-12 hour) hike (or slightly shorter run) from the Youngs Peak Trailhead or from an overnight (or longer) camp at the lake. Reaching this summit requires stamina, excellent route-finding skills, and an ample supply of water.

From the outlet of the lake, go due west up through the trees (much easier than trying the adjacent scree slope) for 300 feet to the top of the ridge.

There are use trails along the ridge that tend to come and go, as well as some infrequent cairns that only confirm you are going in the right direction (but you need to be going in that direction to find many of them). Try to stay on top of the ridge as much as possible, but there are exceptions to this. At 5,680 feet, you'll come to a large outcrop which is passed to the east (the west side is a frustrating and exhausting bushwhack).

Just above this outcrop, a clear use trail, well-marked with cairns, will take you around the west side of Point 6121 to the big saddle at 5,900 feet. You may see some tracks going over Point 6121 but don't go up there, as that's a massive waste of time and energy.

From the saddle, you'll be looking up at the final 1,300 feet or so to Preston's summit. The climbing from here is steady and relentless. Stick as close to the ridgeline as you can, tucking and weaving to find the ever vague use trail and those confirmatory cairns. The climb, while strenuous (2,200 feet in 1.6 miles), is never more than high YDS Class 2 (hands and feet needed). If you find yourself in definite Class 3 terrain (or above), you're off-route.

From the summit you can, on a clear day, see the Pacific Ocean to the west, Mount Shasta and the Trinity Alps to the south, and unbroken miles and miles of one of the most rugged wilderness areas in California spreading out below you.

After enjoying the summit, make a careful descent back to the lake. Spending the night at the lake would mean not having to hurry your descent. Even though the use trails and cairns are (slightly) easier to see from above, you should take your time descending, since the ridge, while only Class 2, is still loose and slippery in spots, with significant exposure. Don't expect to descend too much faster than you ascended. 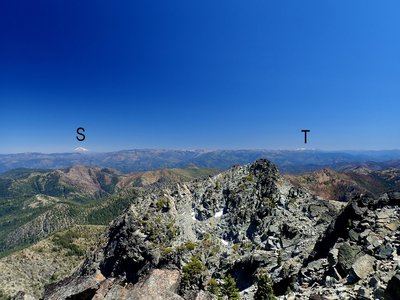 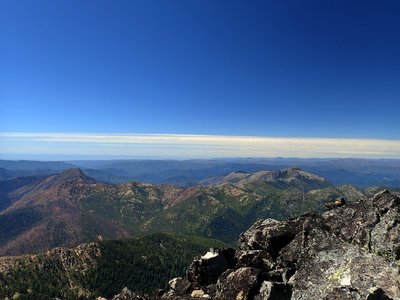 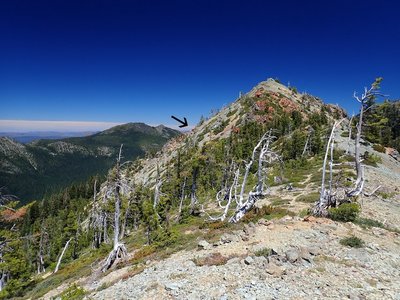 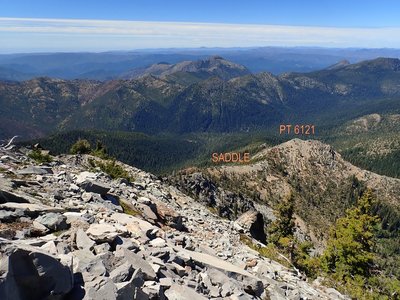 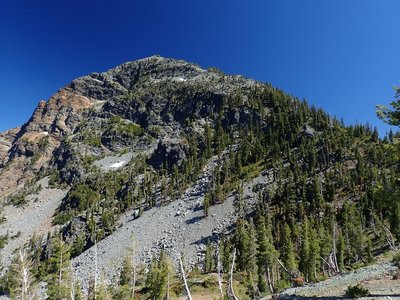 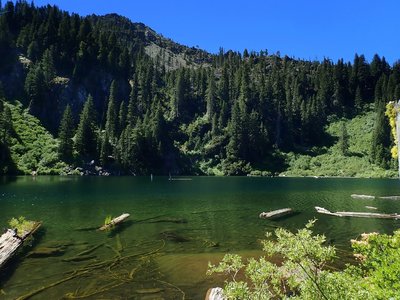