“A boardwalk trail to one of the most photographed waterfalls in Iowa. ”

Please stay on the marked paths and boardwalks.

Bridal Veil Falls, next to the actual Pike's Peak Overlook itself, is the most iconic feature of one of Iowa's most iconic state parks. As such, it is worth seeing, but hikers should be prepared to contend with larger crowds than anywhere else in the area.

The trail to the falls, starting from the main parking area, begins as a sidewalk. On the left, before the trail turns to boardwalk, there is a bear effigy mound. This is one of the most accessible—i.e. visible without a steep climb—in the area. As always, respect these features as the sacred spaces they are; do not hike on the mound.

After the bear, the trail turns to boardwalk with steps. A few "pullout" overlooks offer some chances to take in the long views of the Mississippi River without quite as much of a crowd as one finds at the main overlook.

Continuing down the steps, the trail turns sharply west (left) and becomes a bit steeper. Trail users cross a few other drainages with similar "waterfalls," but the proper Bridal Veil Falls is obvious. It has its own small boardwalk spur trail to allow close-up views of the waterfall and the cave behind it. Going behind the waterfall is prohibited, but this prohibition is often ignored to the detriment of the highly-erodible hillside on which Bridal Veil Falls sits. Please stay on the boardwalks to prevent destroying the scenery.

At the base of the falls, a large cone is forming. Water flowing out of the hillside deposits minerals in the same spot century after century, creating a "stalagmite," the kind that normally forms in caves, but in this instance is occurring outside. Pretty neat!

After enjoying the falls, hikers can either turn back the way they came or take the Myotis Trail to get back to the parking area. For a longer day, continue past the falls and visit Hickory Ridge, an incredibly scenic hilltop graced with ancient Native American earthworks. 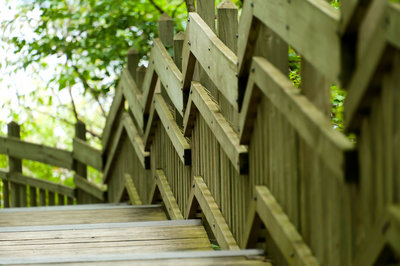 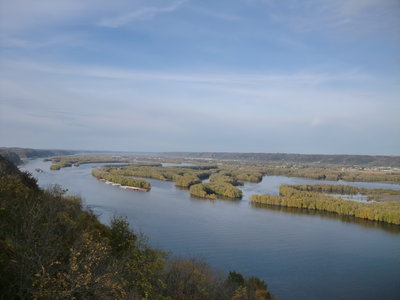 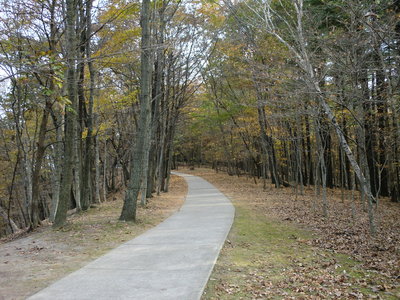