“Hike one of the most amazing gorges in the world. ”

The gorge is only open from 1 May through 15 October, and the gorge is subject to closure in the event of inclement weather.

The hike ends at the small coastal village of Agia Roumeli where there are a few restaurants and a beach on the Libyan Sea. If you've got time, you can go for a swim and/or grab a bite to eat. Your knees will be sore for days after this if you're not used to this kind of thing, but this one-of-a-kind experience is well worth it.

Unfortunately, the Samaria Gorge has been discovered, so you'll most likely complete this hike as one of the throng of tourists that descend on the gorge daily when it is open. The outing takes the good part of a day so most of the groups leave around the same time to be able to take one of the last public boats leaving Agia Roumeli, which is only accessible via the harbor.

Most people (and there will be a lot of them) will hike this as part of a tour group. Ask at any hotel or inquire at one of the many tourist offices on Crete and they will have a tour offered. A typical tour will pick you up at your hotel and drop you off at the start of the route near Omalos. A guide will then follow the group out to the mouth of the gorge where you'll join the throngs of visitors taking the public boat to Hora Sfakion where tour busses will pick you up to return you to your hotel. Most tours include all transportation as well as the 5 Euro park entrance fee.

There are a number of rest stops (with spring water and toilets) along the way. The park also has in place a network of emergency assistance locations for medical emergencies or in the event of a fire (it is very dry).

The GPS signal in the gorge isn't so good, so the GPS track might not be the best, but there is only one way in and one way out of the gorge and you won't get lost.

The route begins near Omalos at 1,234 m (4,048 ft) and it ends at sea level in Agia Roumeli. Overall, the path is quite rocky, so you'll want boots with good ankle support or a very sturdy shoe for this hike.

The first 2.4 km (2 mi) is very steep with a number of switchbacks and some steps as you pass through a forested but typically very dry area. Breaks in the forest offer the best panoramas of the surrounding White Mountains before you descend to the floor of the gorge proper. Finally, another 2.4 km (2 mi) take you down to the gorge proper where you meet the Tarraios River for the first time.

Shortly after you reach the floor of the gorge, you come to the abandoned village of Samaria, from which the gorge gets its name. The village was abandoned shortly after the formation of the park in 1962. Many people will stop here for a picnic (which must be brought in) as there are a number of places to sit. You'll also appreciate the numerous shade trees. You can also explore the ruins of the houses and churches of the village.

Following Samaria, the trail follows the river very closely. The river is not generally wide or deep. The trail crosses from one side of the river to the other in this section, but generally there are stones in the river so you won't have to get wet feet.

Another highlight of the hike is the so-called Iron Gates, which you'll reach at about the 11 km (7 mi) mark. At this point, the gorge is 4 m (13 ft) wide and 300 m (900 ft) tall. The high cliff walls provide great shade and form their own microclimate.

Around 12.9 km (8 mi), you exit the National Park proper as the trail merges with a road and you begin to see signs of civilization as you head towards Agia Roumeli. At this point, there are still about 3 km (1.8 mi) to the mouth of the river in Agia Roumeli. You'll pass a number of other abandoned stone structures along this stretch before reaching town.

In Agia Roumeli, you'll likely have a prearranged meeting time/place with your tour, but regardless, you'll most likely be catching the public boat to Hora Skafion. You can pass the time at one of the many cafes or if you have a lot of time, take a dip in the Libyan Sea.

If the full trip down the gorge might be too much for you, you can also make your way into the area from Agia Roumeli up to the Iron Gates or Samaria.

Watch for Kri-Kri goats which used to be common throughout Crete but can now only be found in the area surrounding the Samaria Gorge. 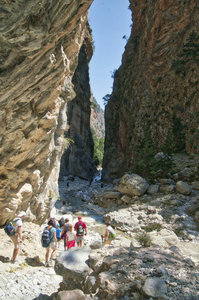 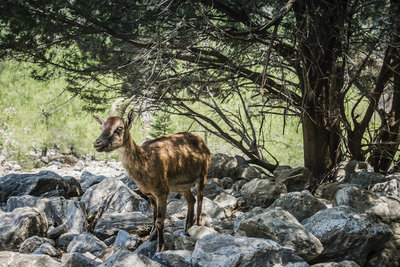 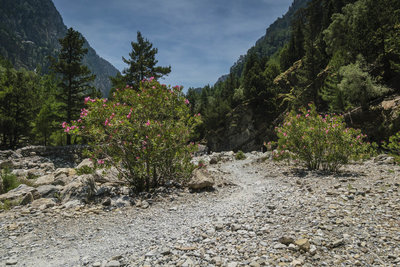 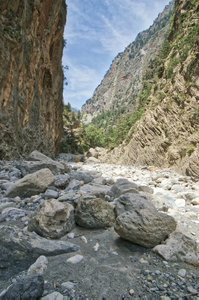 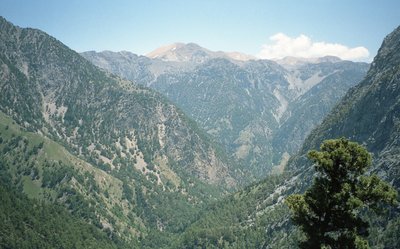 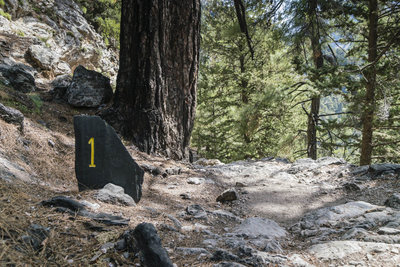