“During very low tide, hike from Linda Mar to a large island with great caves, tide pools, and geological formations. ”

This route can only be reached during the extreme low tides (-0.8 or lower) that occur November-February and May-July. See Princeton, Half Moon Bay tab for saltwatertides.com/dynamic.…. Leave Pedro Point/Linda Mar at least 60 minutes before low tide and sure to be off the islands before the tide comes in. Shelter Cove is private. Residents are friendly as long as you stay below the high tide line. Do not attempt to use the Shelter Cove stairway that goes up the cliff.

There is a new Private Property sign at the top of the stairs that lead from Shelter Cove Road to the beach, so it is probably better to begin this hike at Linda Mar Beach.

This is one of my favorite hike: spectacular views, amazing geologic formations, tide pools as full of sea life as anywhere on the California Coast, and the most beautiful coastal cave that I've seen in California.

Park on Danmann Ave near the shore cliffs in Pedro Point (South Pacifica). From the north end of Danmann, turn right and hike about 150 yards east to to a path and stairs that lead to the ocean. Continue west past the docks (you may have to wade here). You can also hike here from the parking lots near Linda Mar Beach.

Once down to the ocean, head west across the small rocks along the cliff to the point leading to Shelter Cove. To get around the point, you'll need to use your hands to climb over the rocks. On the far side there are about 50 yards of slippery tide pools before the Shelter Cove beach. I love the view of the rustic cabins. Residents are friendly as long as you stay below the high tide line. Above the high tide line is all private land.

From the other side of the sand, hike along the cliffs to a point from where you have to step across a wet channel to reach the chain of islands. The first island has a very visible shallow cave on the right. On the south side is the easily missed, narrow entrance to "Monstro's Belly" (my name). You can climb down into this cave. It is tube-like, with arched ribs that are covered with pink and purple sea life and flat bright orange and red sponge-like blobs. The water is shallow with very mild waves.

There are two more places where you have to step across narrow channels to reach the main island. Be sure to return before the water rises in these channels. Mid-way across the main island, well above the south shore, is another cave that goes all the way through the island. Within the cave, you can see light, but not the exit at the far end. The water appears shallow, but the waves are a little larger.

It is possible to climb high up the rocks, but do not go to the top and disturb the nesting birds. Similarly, do not approach any sea-lions, as this will cause them to swiftly crawl away, dragging their bellies across the sharp rocks.

Note: Is is dangerous to hike southeast around the point next to the islands, especially in high surf. About 400 slippery, difficult yards down, there is another point that you would have to swim around. It would be easy to be trapped here by the incoming tide. An interesting feature is a large shallow alcove that looks like a large cave or drain when viewed from the Devil's Slide Trail.

San Pedro Rock is as rich in sea life as anywhere on the California coast. It is covered with barnacles, bay clams, sea anemones, starfish, sea grass, kelp, and many species that I have not identified including beautiful sponge-like flat blobs of something orange and red. The island is often visited by sea lions. There are many types of birds and large numbers nest on the high points. 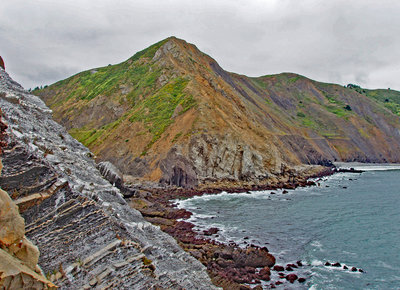 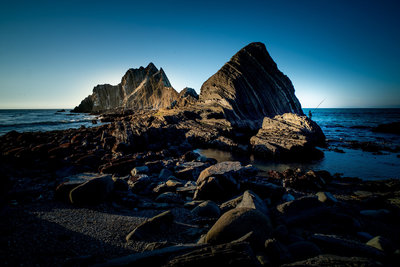 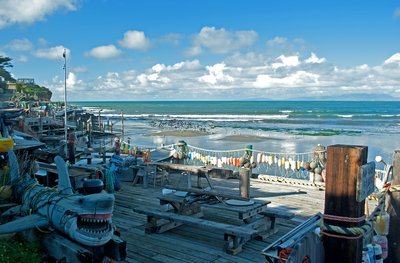