“A short trail with some rolling hills and a 20-foot waterfall along South Fork Jacks River. ”

The trail starts off the Three Forks Road (FS 64) near the Jack's River Fields camping area. It's a former roadbed slowly being turned into a singletrack. Don't let the entrance fool you, it gets more singletracky a couple hundred yards in.

Shortly after you enter the trail, you'll hear the roar of the river. If you stop to investigate, you'll find a 20 foot waterfall about 50 feet off the trail. There are a couple other cascades in the river that you can hear, but it is difficult to see them through the forest cover.

The trail is generally downhill from south to north although there are a couple of short and steep climbs too. There are also a lot of fun rolling hills along the way and about half a dozen small (two-three feet wide) easy creek crossings in the first 2.0 miles. Then you'll cross the south fork and shortly thereafter the west fork of the Jack's River. These are each about 20 feet wide and you can count on enough water to get your feet wet.

About a third of a mile in the Benton MacKaye merges with the trail from the right. It breaks off again to the right about 2.0 miles in. This point is the northern terminus for the Pinhoti Trail, which runs all the way to Alabama. The Pinhoti Trail continues to the south just after the first major river crossing of the south fork. 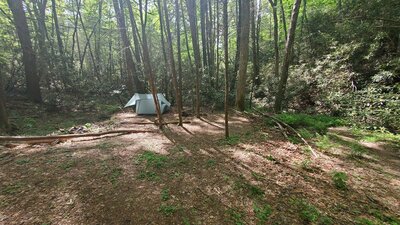 Oct 20, 2020
Jennifer H
We didn't hike the whole way because we had our dogs with us and we were doing an out and back. Great trail.