“This hike starts from a medieval centre of cultural significance located around 60km away from Yerevan. ”

Cell phone service (via VivaCell-MTS, Beeline and U-Com) is available throughout the whole hike, and the 911 emergency service operates throughout Armenia in case of any accidents.

This out-and-back hike starts from a medieval centre of cultural significance located around 60km away from Yerevan, in the town of Tsakhkadzor, in the Kotayk province and heads to the village of Makravan. The best time to hike in the area is April to November.

Be sure to bring bottled water!

In order to reach Kecharis Monastery, the most convenient option is to take a taxi from Yerevan to Tsakhkadzor. This will cost around 5,500 AMD. It is recommended to take a taxi with a working meter (be sure the driver uses it), or agree on a price beforehand. There are also buses to Tsakhkadzor that leave from Yerevan’s Zeytun District, near Raykom. This should cost between 500-700 AMD. From the last stop, you'll have to hike up to the monastery.

This hike starts from a a monastery located in town. Tsakhkadzor is classified as one of the smallest towns in Armenia by population; however, it is a popular mountain resort and has a large sports center. It also has a 6km aerial tramway, built in 1972 (recently upgraded to a total of 10km), which has long been a common destination for locals and tourists alike wishing to see the view from the peak of Mt. Teghenis.

This aerial tramway, which operates in summer and winter months, also offers access to some of the best ski slopes in Armenia. If it is operational, a ride to the peak is definitely recommended, for the stunning 360-degree panoramic views. Tsakhkadzor is also a locally renowned health resort, famous for its rest houses, tourist bases, and restaurants serving diverse ethnic dishes from the Armenian cuisine.

The hike starts at Kecharis Monastery, where plenty of Armenian youth from all over the country get married. The monastery is located right in the heart of the town. The ceremonies held in the church join many Armenian families, and visitors are quite likely to witness an Armenian wedding in the monastery while hiking in the area.

Along the way, the trail also runs through the Aghveran National Park which is home to diverse fauna and flora. After just under a 3-mile hike, the trail ends at the Makravank Monastery. After spending some time exploring the are around this monastery which is located on the outskirts of the village of Makravan, head back the way you came to complete your hike.

Flora: The Tsaghkunyats Mountains on the north and the Geghama Mountain Range on the east border the Kotayk province, at an altitude between 900-2,500m. The flora of the Kotayk province is rich and varied, with many plants, bushes, and forests covered most of its territory. Some types of flowers and plants, beneficial to farms, grow along this route. There are also some species of plants with medicinal use.

Fauna: Kotayk province, especially the area around Tsakhkadzor, is rich in fauna mainly on the lower slopes. Big mammals include brown bears, wolves, and deer, and there are a variety of fox, badger, weasel, hare, marten, and mice. During the months of summer, one can come across reptiles such as Malpolonmonspesscullanus, Mabuyaaurata, and Eumecesschneideri. Among the amphibians, one can observe are Rana ridibunda, Bufoviridis, and Hylasavigna,and common birds (almost 50 species) include oturnixcoturnix, Perdix andStreptopeliaturtur, and Falco tinunnculus.

The Kecharis Monastic Complex was constructed between the 11th-13th centuries and was one of the major cultural and religious centres of Medieval Armenia. Great scientists and political figures of the time lived and worked in the monastery. The complex consists of four churches, two chapels and a gavit. The main temple, the Church of Saint Grigor, is the monastery's first structure, erected by Grigor Magistros Pahlavuni in 1003. Inscriptions on top of the southern entrance support this fact. The church has been destroyed and renovated several times over the centuries.

Makravank, built between the 9th-13th centuries, is located near the village of Makravan. The main structure of the monastery, the 13th century church dedicated to Surb Astvatsatsin (Holy Mother of God) has a circular tambour and a conical cupola. The complex also encompasses the lower walled gavit and a medieval cemetery. The church is surrounded with khachkars (cross stones). 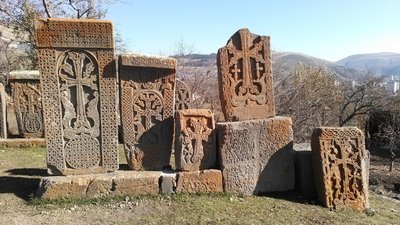 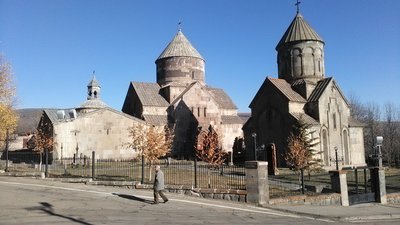 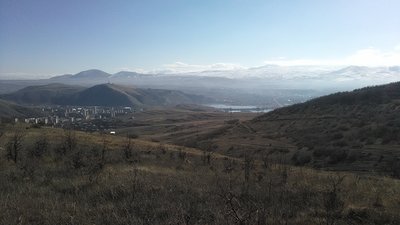 Haghartsin, Not set (Republic of Armenia)