“A short, but invigorating trail to panoramic views from atop Kerby Peak. ”

This trail is usually open (snow-free) between mid-April and late October. In the spring (April-June), there are wildflowers on the east-facing slopes crossed by the trail. The trail is managed by the Bureau of Land Management. Google maps may point you to access through Murphy. It's easier to go to Selma on 199 and turn left at Ray's Grocery. Use GPS from there.

My wife and I attempted to reach this trail today, driving from Grants Pass through Murphy as Google Maps suggested. Next time we will try the road from Selma to the trailhead. Unless driving a large vehicle with high clearance (we drive a Subaru Outback), I would not recommend the Murphy Creek Road route to other hikers. About four miles past the turnoff from Hwy 238, the road becomes gravel through private land, then turns into a dirt access road. Many potholes, creeks, and rough terrain to cross. We ended up turning around and picking a different hike.

It is easier through Selma. Take 199 to Selma and turn right at Ray's Grocery. GPS from there. Great hike.

This trail climbs to the summit of Kerby Peak overlooking the Illinois Valley in Southern Oregon. Its rocky summit was once the site of a fire lookout and still offers spectacular, panoramic 360-degree views. There is a trail sign and parking for 4 to 6 cars at the trailhead but no amenities. There is no reliable water source at the trailhead or along the trail.

Starting from the trailhead at 2,943 feet, this well-maintained trail climbs steeply and steadily for 1.5 miles up several switchbacks to crest the ridge just below Point 4463. From here, you'll have a view of Grayback Mountain and Big Sugarloaf Peak to the southeast. When the valley is filled with fog, this is where you're likely break into sunshine. Some folks stop their hike here, not realizing the hardest part is over. From here on, the grade is easier and the views increasingly great.

Continuing on, the trail climbs at a more mellow angle as it contours around the east side of Point 5112, then ascends a series of short switchbacks through manzanita to Kerby's summit. An official state lookout was established here in 1922, where it remained until it was removed by burning in 1966. From the summit on a clear day, you'll have a great 360-degree view with Mount McLoughlin to the east. Preston Peak—the high point in California's Siskiyou Wilderness—will be prominent to the south. Peaks in the Kalmiopsis Wilderness can be seen to the west.

The rare Brewer's Spruce grows along the trail near the summit. This native species of spruce is endemic to the Klamath Mountains of southwest Oregon and northwest California. It is sometimes called a "weeping spruce" for the distinctive way its foliage droops. 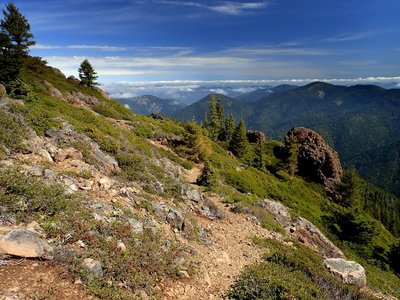 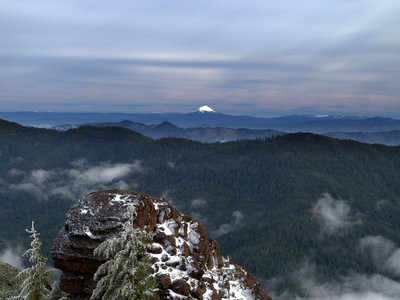 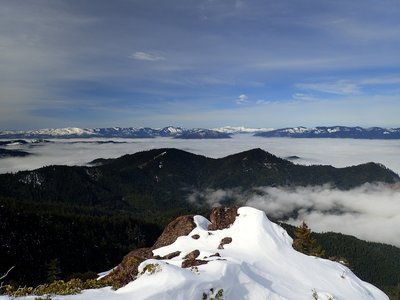 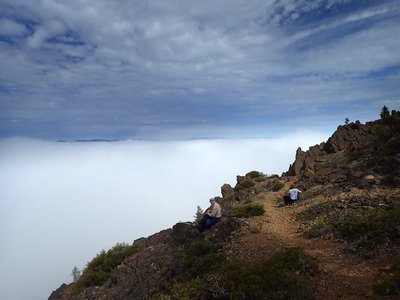 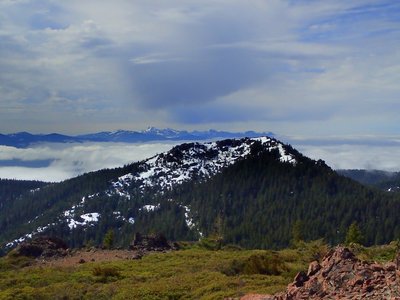 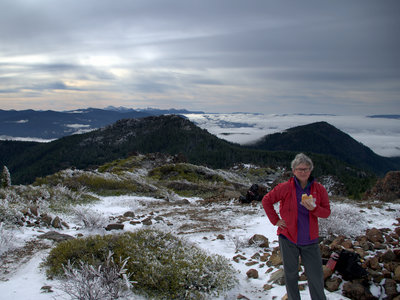