Rim of The Gap Trail

“A challenging trail to give you the feel of Donkey Kong, up and down ladders in sections. ”

This trail is described from west to east toward the Jones Gap Ranger Stations since I followed it as part of a loop. This trail was probably the most challenging of the trails I did for the day. It is rated by the Ranger Station as Very Strenuous, 4.3 miles, 4-5 hours to hike and marked with yellow blazes. The trail starts off of the Frank Coggins Trail and looks more like a game trail at first as it moves away from a railed bridge.

At 0.3 miles in there is a big rock face, the trail continues down toward the left a little and not straight across as I originally assumed. There were trees down at the time from Irma and the yellow blaze blended in a little with the fall leaves so at first I hugged the face, on what felt like a game trail, that ended at a waterfall with no safe crossing before backtracking a little and finding the blaze.

Once back on the trail, the first 2.0 miles seemed to be the most challenging part of this trail. Right off the bat, there are several water crossings (feet got a little wet). The trail continues up and down steep undulations along the edge with sections where log-like ladders are placed to assist in some climbs. There is also a squeeze between a hole in the rocks. In the first 2 or 3 miles, there will be a few less obstructed views for fall colors.

A caution to hikers with a dog, this section is challenging unless they are good with climbing up and down ladders. There were a few sections where you could see the difficulty etched in from past dogs on the trail.

Around 2.0 miles in is where the trail widens out more on top of the ridge and becomes easier than the start. The trail does remain rough, so watch your feet and ankles through sections of rocks, roots, and ruts.

At around 2.25 miles, the John Sloan Trail comes in from the right. It's a fairly short trail that connects to Pinnacle Pass Trail with a series of pink-ish blazes. Around 2.7 miles, you have another shorter connector trail with the Rim of The Gap Trail and Pinnacle Pass Trail that is about 0.1 of a mile. This purple-blazed connector also had a little trail sign up in the tree. At both intersections, stay left on the Rim of The Gap Trail to continue towards the Ranger Station as the trail descends down the mountain.

At roughly 4.5 miles, hikers will see the trailhead for Pinnacle Pass Trail connecting directly into Rim of The Gap Trail. A short distance past that, maybe 0.25 miles, the trail end into Jones Gap Trail where you'll take a right back out to the parking lot.

Hardwood trees such as oak and hickory can be found along the trail. Hikers will also find shorter trees like flowering dogwood and rhododendron with ferns, plus flowers and mosses at ground level. Animals in the area include; black bears, white-tailed deer, reptiles, amphibians, wild turkey, wood peckers, warbles, eastern blue birds and spring migratory songbird to name a few. 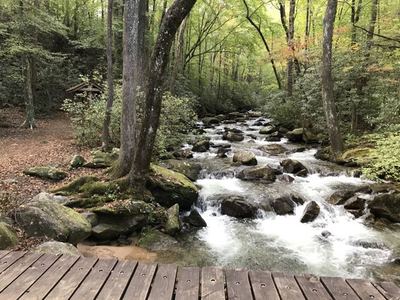 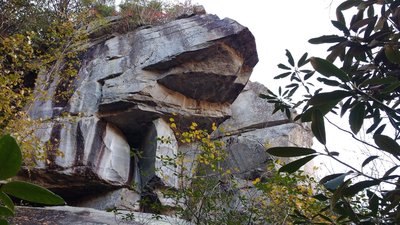 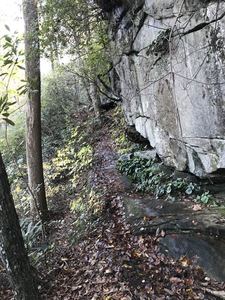 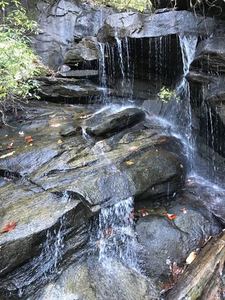 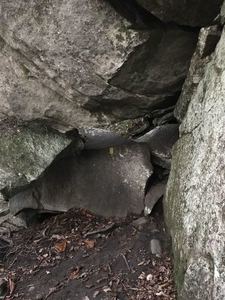 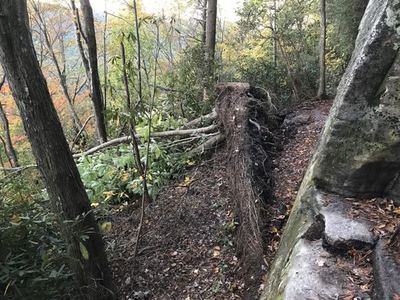