“This trail connects Summit Meadow with Huckleberry Trail, mostly on a historic mining road through a flowery meadow. ”

Wilderness permits are required, but they are easily obtained at any Stanislaus Forest ranger station. Campfires are not allowed above 9000 feet.

Most people hike the Horse Creek Trail as part of a long loop. However, I found the trail to be remarkably beautiful in itself, especially the last mile of the main meadow. The southwest end connects to the Huckleberry Trail. The northeast end can be reached via Emigrant Pass, Bond Pass, or Brown Bear Pass.

As described in more detail in Ben Schifrin's 1980 book Emigrant Wilderness and Northwestern Yosemite, the Horse Creek Trail follows an abandoned road that was built in 1943 to reach the Snow Lake and Cherry Creek tungsten mines. The latter is farther down Cherry Creek on the Huckleberry Trail. Tungsten was an important mineral during World War II as it was used for hardening Allied steel. After the war, the expense of maintaining the road was no longer cost effective and the mines closed.

Starting from the Lunch Meadow Trail (also called the Bond Pass Trail), the road descends down the creek coming from Summit Meadow. Most of the steep parts of the road are at least partially covered with 4-6 inch rocks that force you to watch your footing. After the trail swings north and crosses both the North Fork of Cherry Creek and the creek coming down from Grizzly Meadow, it passes the Grizzly Meadow Trail. This is no longer signed or maintained, and even when it was, it was so steep and sandy that it was recommended only for downhill travel.

The trail continues down through the trees and small meadows, with the slope becoming more gradual the farther you go. There are huge granite domes on the north side of the trail. It finally enters the long, wide, and nearly flat Horse Meadow. This is a remarkably pleasant and beautiful meadow that is surrounded by granite domes and has Cherry Creek wandering lazily though. At least until the snow is gone from the higher peaks, it is green and covered with flowers.

About a half mile from the Huckleberry Trail, there are two snow survey cabins on the far side of the meadow. There used to be a trail that branched off here, passed the cabins, and climbed up to Black Bear and Bigelow lakes, but that trail is no longer signed or maintained.

At the end of the meadow, you have to climb 20-30 feet in elevation to meet the Huckleberry Trail. 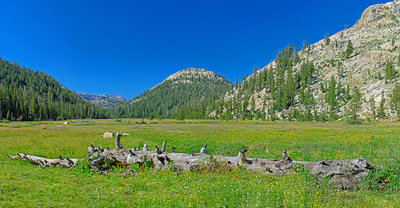