Wards and Randalls Islands are separated from Manhattan by the Harlem River, from Queens by the East River and Hell Gate, and from the Bronx by the Bronx Kill. Formerly separated by Little Hell Gate channel, the two islands were filled in by the early 1960s and now host over 400 acres of parkland in addition to city infrastructure.

Beginning from the 103rd Street Footbridge (1951), head south on Wards Island along the Harlem River, viewing Manhattan's upper East Side to your right. At the bottom of the island, the trail passes under the RFK Bridge (formerly Triborough; 1936) and Hell Gate Bridge (1917). Between the two bridges, a native plant garden is located to your right. Across the street, on top the hill to your left, is the island's urban farm. The trail continues underneath Hell Gate bridge where paving ends.

To exit the under-bridge path you'll pass through a gate. The trail starts/stops here due to the existence of the Wards Island Water Pollution Control Plant (1937), which serves over 1 million city residents with a capacity of 275 million US gallons per day (in addition to a telltale aroma). Continue following the direction of the bridge until the street turns toward the left; here you'll make a right to return underneath Hell Gate Bridge where a stretch of paved path resumes. While you traverse this section, you are crossing the original boundary between Wards and Randalls Islands.

At the end of this path, follow the mulched trail on your left. You'll return back to the street, passing a bus stop. Again, continue via a stretch of sidewalk in the direction of Hell Gate Bridge. You'll cross entrance roads leading to the water treatment plant and the NYC Fire Department's training academy on your right. After crossing, you'll see that the paved trail resumes beneath Hell Gate Bridge.

Follow the trail a short distance until you see a paved footpath exiting to your right. From here, you'll circle counterclockwise along the Sunken Meadow Loop, passing by the Tennis Academy on your right and numerous baseball diamonds to your left (this corner of Randalls Island hosts 31 diamonds). Past the Tennis Academy you'll see one baseball diamond to your right; here, veer to the right to head up a small hill. This area hosts native grasses and has a small pull off at the top. In addition to a view of the East River, at this location you can turn around to see some of the Fire Academy's buildings; a sharp eye will spot burn marks trailing out from some of the windows.The academy features a subway tunnel with tracks and two subway cars, a helicopter pad, a replica ship, and multiple buildings designed to simulate the different types of structures encountered within the city limits (most of this is out of sight).

Continuing to circle along the outermost path, you'll begin to head west along the Bronx Kill. This shallow straight delineates the border between Manhattan and the Bronx. After crossing under Hell Gate bridge, you'll reach the RFK/Triborough; cross underneath and continue along the sidewalk/trail.

As you follow the sidewalk while looping around the top of Randalls Island, you'll be passing more baseball diamonds to your right. Just before crossing under the overpass, on your right is the NYPD Harbor Unit marina. Keep to your right to follow the Harlem River Path.

Continuing south, Icahn Stadium (2005) is on your left. South of the stadium you'll encounter a roundabout area where you'll turn right to pass across Little Hell Gate bridge through a salt marsh, crossing the original boundary between the two islands.

Turning right after exiting the marsh, you'll pass through a wooded area and the Water's Edge Garden, featuring native plants and a view of East Harlem across the river. You'll pass a small horse stable on your left before completing the loop.

These islands suffered ecological damage during the 1800s and 1900s due to pollution and use. Rehabilitated areas include native gardens, an urban forest, upland coastal habitats, freshwater wetlands, and a tidal marsh. 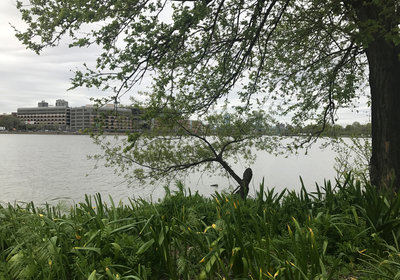 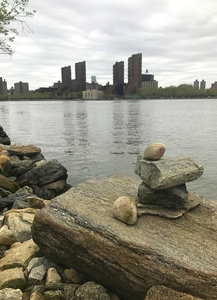 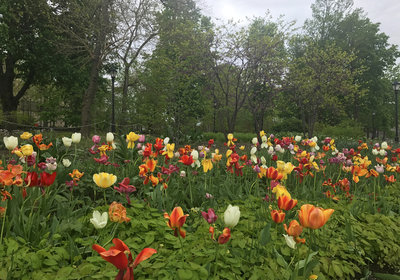 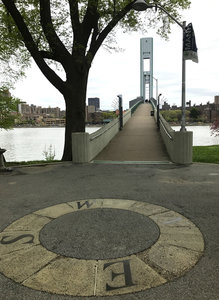 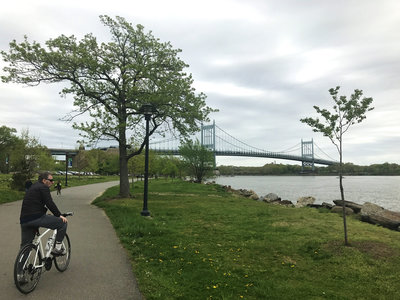 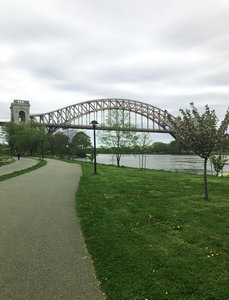