“A crackerjack climb with a handful of roots and primitive stairs up very steep terrain. ”

Named for Fred Darvill who created the trail and traveled it regularly during the hike from his house to the summit. Since Fred's passing in 2007, the Darvill family has donated two sizable sections of land that have greatly extended public access to the park.

As the steepest route in the park, Fred's Trail isn't for everyone. But if you feel up to it, it's full of character and interesting challenges. Locate the "caution" sign at the intersection of Bonnie and Clyde's across from the West Loop. This starting point begins as a steep gravel side-slope with a few buried rocks to aid your passage along the challenging grade.

Ahead, a collection of faint rock steps lead to a tight switchback where the trail turns and climbs along an exposed root (sort of a natural staircase that's pretty cool to see)! Just afterward is another switchback that heads into a bit of scramble that can be tricky when wet or covered in summer's dust.

Fred's Trail caps things off with another steep section that's been supplemented with tall, narrow steps. From there, there's just a little ways to go to reach Fred's Connector which leads toward Ginny's Trail to the left or the Pickering Viewpoint to the right.

It is possible to hike down, but it's much easier to navigate going up. From time to time, locals will even bring loaded packs on Fred's Trail to practice for mountaineering. 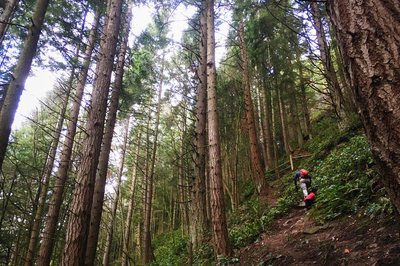 Rosario to the Points and Back