“Debatably one of the most popular routes in L.A., get above the city on this short-but-sweet loop. ”

Recent trail work has been underway to repave sections of trail in the park and to add water fountains. Please respect all signage and closures.

Given its proximity to West Hollywood and easy access, it's no wonder why this loop is one of L.A.'s most popular hikes. This route heads north into the hills of Runyon Canyon Park with some steep grades to start that are rewarded with panoramic views of the city and surrounding hills.

Some say there is a Runyon Canyon prophecy that you can't complete this hike without seeing at least one celebrity.

To start, head through the southern gate onto Runyon Canyon Rd and head north for a hundred yards. Look to the left (west) for the start of the West Trail (Spine Trail). Head onto this trail as it bends back to the south and then north before beginning a steep climb up the ridgeline. Continue north for just over a mile and look for the North Connector to the right (just north of a parking area/clearing) that heads toward a house. This links up with the Runyon Canyon Rd.

From here, turn back to the south (right) on the Runyon Canyon Rd and enjoy the gradual descent with views out toward the city. The recent trail work has added a few water fountains along this stretch so now is the time to fill up! Continue for less than a half mile and look for the East Trail (Steps Trail) starting off to the left (east).

This trail, like the West Trail (Spine Trail), is unpaved but makes for a less steep descent along the eastern ridge of the park with a few constructed staircases.

One long switchback marks the final descent and the time to look out for the last link on the South Connector that heads west back to the start point.

Chaparral ecosystem dominated by shrubs such as sclerophyllous.

Along this hike, you'll also encounter some relics of Los Angeles history that include a few building ruins that were designed by Frank Lloyd Wright and the "Outpost" sign from 1927 that was constructed to attract prospective homeowners to the area. 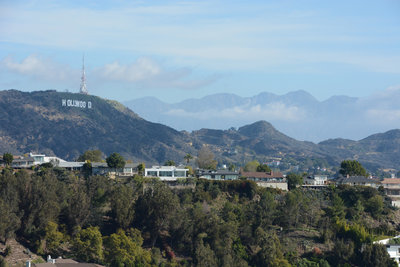 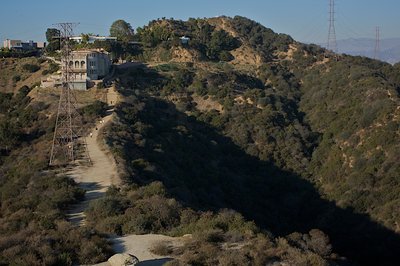 Ferndell to the Griffith Park Observatory