“A stellar route to some of the best views in the Wind River Range. ” As per USFS rules, make sure to camp 200 ft from trails and water. There are also no fires at Island Lake or the areas above.

Titcomb Basin should be a place on everyone's bucket list. The basin presents some of the best views of the core Wind River Mountains. The hike to Titcomb Basin has it all. The trail passes through dense forest, flowery meadows, lakes, and ponds. Many people come to this area for the world-class fishing and climbing, but this area is a treat for anyone who enjoys exploring and epic views.

The Wind River Range is Grizzly Bear country. Make sure you properly store food, bring bear spray, and are aware how to deal with bears in case of an encounter. Also, as per USFS rules, make sure to camp 200 ft from trails and water.

Camping is difficult in the basin and most of the sites are illegal. Some sites can be found at the outlet of Lower Titcomb Lake, as well as slightly above Titcomb Basin at Mistake Lake. If you decide to camp in the basin, make sure to stow food properly. There are no trees in the basin, so make sure to bring bear canisters or hang food off of a large boulder, out of reach of the potential wandering bear.

Island Lake is a popular place to camp. There is great camping, fishing, sandy beaches (a couple), and many great mountain views take in. Just be aware that there are no campfires allowed at Island Lake or areas above.

The Pole Creek Trail starts at the Elkhart Park Trailhead. The trail gently climbs through a nice forest of lodgepole pines with bright green huckleberry undergrowth. After a few miles, the forest opens with distant views of Fremont Peak, and interspersed meadows that may be filled with flowers depending on the season. At 4.5 miles, you'll reach Photographer's Point where most of the day-hikers will turn around. This is a nice place to take a break and snap a photo of some of the Wind Rivers' highest peaks.

After leaving the point, the trail descends slightly to the Eklund Lake where you'll take a left and follow the signs towards Seneca Lake. From the junction, the trail descends past Barbara Lake and then rises up to Hobbs Lake. Hobbs Lake is a popular camping spot for many backpackers on their way in and out of Titcomb Basin and the surrounding areas. Good campsites can be found on the southwestern side of the lake, but not the only ones.

From Hobbs Lake, the trail descends considerably past small ponds and meadows before making a steep ascent up to Seneca Lake. Seneca Lake has great views of Fremont Peak and is a great place to stop and take a break or setup camp for the night. The camping around Seneca Lake is a little harder to come by since the lake is surrounded by sheer granite cliffs which drop steeply into the water. Even with this said, many people decide to camp here. Campsites can be found at the lake inlet or on the southwest corner of the lake.

Beyond Seneca Lake, a trail to the left leaves the main trail and heads to Lost Lake. Continue straight and you'll soon pass a couple of lakes, including Little Seneca Lake which is rumored to have camping on the eastern side. After Little Seneca Lake, another trail intersection presents itself. After rounding Little Seneca Lake, the trail turns left (northeast); continue northeast past the Highline Trail, following signs to Island Lake. The trail immediately climbs over a small pass where views begin to open up. After a short descent, the trail splits again. A trail to the left will take you to Jean Lakes and Fremont Crossing. Continue to the right towards Island Lake.

The rest of the trail to Island Lake passes through meadows which can be filled with Elephant's Head and other beautiful flowers, depending on the season. The views of the core Wind River peaks also start to open up. The final descent into Island Lakes presents a nice place to stop and take in the great views of Island Lake, the wall of peaks (Fremont, Sacagawea, and Helen) east of Titcomb Basin and other peaks to the north.

The trail to Titcomb Basin continues around the southeastern side of the lake. An unnamed trail ascends steeply at the inlet up to a lake above. Stay left and continue around Island Lake.

About a mile from the last trail junction, you cross a small saddle and enter the broad expanse of Titcomb Basin. The scenery is breathtaking - enjoy views of the glacially carved U-shaped valley, surrounded by some of the tallest peaks in Wyoming.

There are many opportunities to explore in the basin. The main trail continues along the eastern shore of the lower and upper Titcomb Lakes to the upper basin. You can continue to the upper basin where climbers make their base camp for climbing the peaks at the head of the basin. The route continues north in the upper basin to Dinwoody Pass or west to Knapsack Col; both may require snow travel and scrambling. You can also take the short jaunt up to Mistake Lake or just wander amongst the lakes in the basin—the views from the basin are spectacular. Many people also decide to scramble up Fremont Peak, the third tallest peak in Wyoming. The route up Fremont leaves from Indian Basin and ascends the peak on the southwest ridge.

There are many opportunities to see wildlife. Mountain rodents such as pika, marmot, ground squirrel, chipmunk, and squirrels are frequently seen. Deer can be seen feeding in the meadows. Both the Grizzly and Black Bear also call the Wind River Range their home.

The Wind Rivers are famous for fishing. Many of the lakes hold golden trout. Titcomb Lakes are not as productive as other lakes in the region. 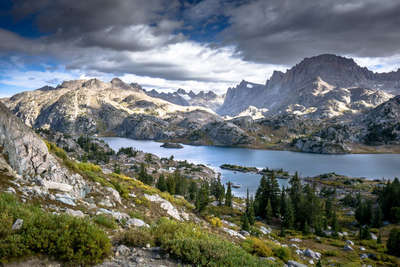 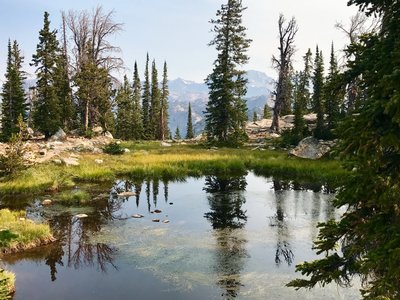 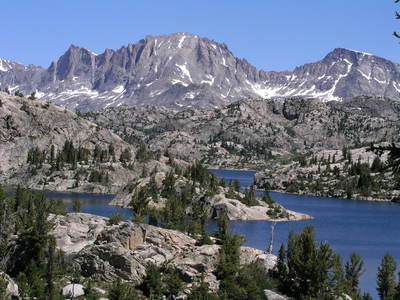 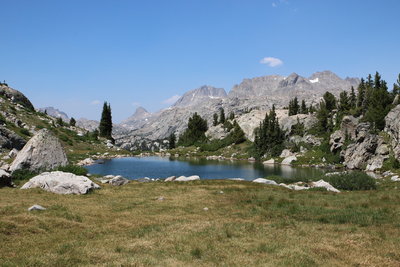 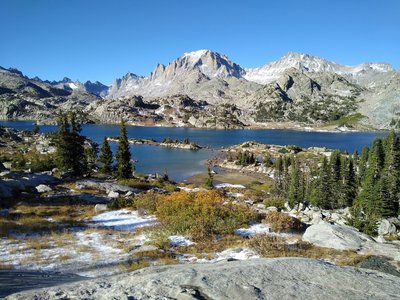